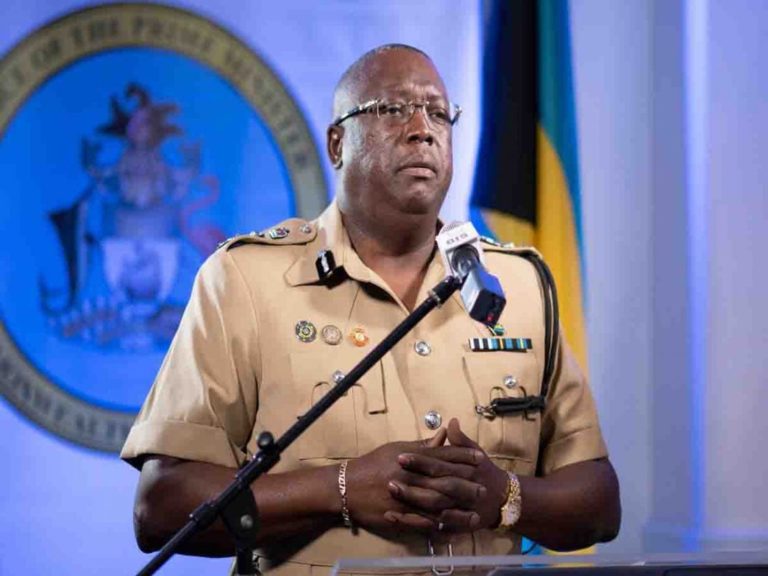 Body-worn footage of “encounters”, pursuits to be made public

NASSAU, BAHAMAS — Commissioner of Police Paul Rolle has advised that certain footage from body-worn cameras of pursuits and other “encounters” will be released to the public.

Rolle said there has yet to be an incident that warrants review or release of footage; however, he noted the public should not expect the release of footage to be similar to the process followed in the United States.

“Our police force is part military; we are modeled after a military organization, so you don’t just fire a police officer,” said Rolle.

He underscored that U.S. police forces are civilian and officers can be hired and dismissed by mayors.

“He has to be court marshaled,” Rolle continued.

He said: “The thing with the images from these cameras is that they will be released. There is a process. The same way you… have the officer [who] has to goes before the Coroner’s Court and they give their evidence, at that point if it’s a fatal shooting for example, the image would be made available at the time of the court matter.

Rolle said the footage in instances of a fatal shooting the footage becomes the property of Her Majesty’s Coroner and is no longer is his purview to release.

However, Rolle said there will be instances where footage is released to the public.

“There are times where there are some other incidents that happen that is in my domain, yes, I can release those,” he said.

“For example, if you have a pursuit; if you have an encounter; and you need to show that. [But] where you have matters where it is fatal and you have to go before the court, once we get those, they become evidence, they are sealed and go on to the coroner.”

Rolle’s comments come on the heels of a police shooting of a black man in Kenosha Wisconsin on Sunday, prompting protestors to take to the streets and athletes to strike.

Jacob Blake was shot seven times by a Kenosha officer seeking to detain him.

Captured footage of the incident shows Blake being shot while three of his children looked on in a nearby car.

He survived and remains in hospital.

Two-hundred body-worn cameras and dash cameras were rolled out to frontline officers of the Royal Bahamas Police Force two weeks ago.

Rolle indicated the rollout of the program has gone well and was performing.

The police force hopes to acquire another 100 body-worn cameras soon, according to the commissioner, who said the acquisition process was underway.

“That’s an ongoing process,” he said. “I want to see that grow, so that when officers go out routinely [they are wearing them].

“I think that people are going to have to understand you know, when you compare The Bahamas to many police forces, even the United States, we still have police forces that do not have the technology that we have.

“We spare no expense in trying to do and acquire the latest technology for our officers to wear and to use.

“And so, we are state of the art and wait until you see the real-time crime center.”

According to Rolle, the center just had to be outfitted with furniture before becoming fully operational.

He said he visited the existing control room Thursday morning after being temporarily closed for sanitization.

The police force has also acquired some 400 bulletproof vests that were ordered last year.

Rolle said due to the timeframe taken to fulfill the order, he has placed an order for another 200 vests.

That’s why they are so corrupt and make their own rules.

Sounds like another ways to take advantage of the people of the bahamas .. we try to be like the u.s in other things so y not this too

It sounds like the only footage to be released will be be useless. I can assure you any footage that incriminates an officer will be quashed or mysteriously not be recorded. Having a military based police force is very wrong on so many levels. Without accountability and civilian oversight alot can be covered up. Militaries by nature and design are a conquering force. The duties of a police force should be to protect and serve the general public. When there is a melting of thectwo forces is where the problem occurs. Which is exactly where we are now.

Being a police officer is not an easy job. Everyone does not have the mental aptitude to handle the challenges and responsibilities tbe job entails.

The police being shady and refusing transparency? Shocker, coming from the same police force where people die and disappear in custody, torture isn’t out of the question and police involved shootings regularly get swept under the rug with no investigation.