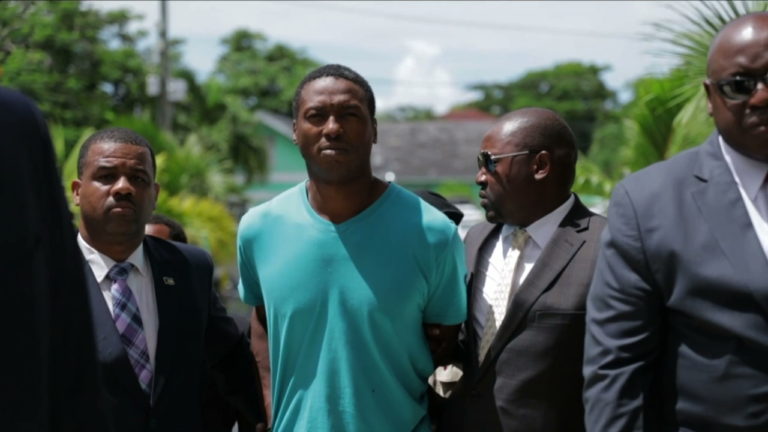 No one was allowed in or out the court complex as Timothy Cole, 48, was formally arraigned for the murder of Aide-de-camp to Governor General Dame Marguerite Pindling – Inspector Carlis Blatch.

Shackled by both his ankles and hands, police – armed with machine guns – escorted Cole into Court number nine.

He relatives screamed, “Freedom” and reassured him of their love, urging him to “keep his head up” during the slow march to the front of the complex.

The matter was heard before Chief Magistrate Joyann Ferguson Pratt.

Cole was charged with murder and armed robbery.

Blatch was shot while doing a school pickup on Dolphin Drive.

His daughter was in the car during the incident but fled when the tragedy unfolded. He died in hospital a short time later.

Cole was not required to enter a plea to the charges and was remanded to The Bahamas Department of Corrections (BDOC).

His attorney Alex Dorsett told the court that his client was allegedly beaten while in police custody and needed medical assistance. Dorsett also asked that the court recommend his client be placed in his own cell as he feared his own life.

Ferguson Pratt, however, said the court does not interfere with the business of the BDOC.

As Cole left court toward the prison bus, one of his female relatives cried out, “Freedom” again but was immediately placed in handcuffs by officers who warned members of the public to stay behind the barriers.

Cole will return to court November 20 at noon.