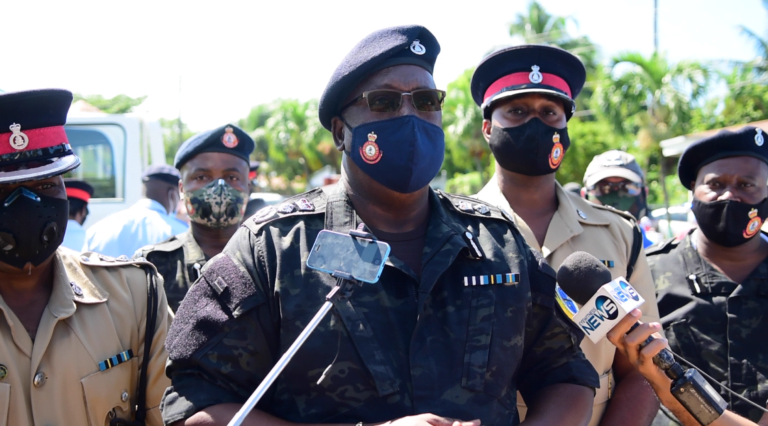 “If you’re found with dope, you ‘gone get’ lock up,” says Rolle

NASSAU, BAHAMAS — Commissioner of Police Paul Rolle said yesterday he does not believe possession of marijuana will be made legal in The Bahamas next year, despite recommendations from two government-appointed bodies to decriminalize possession of small quantities of the substance for personal use.

His statement came two days after Prime Minister Dr Hubert Minnis advised Parliament the records of individuals convicted for possession of small amounts of marijuana will be expunged next year.

Responding to questions from the media, the commissioner indicated that he will be answerable to enforce the law whichever direction the government takes, including any changes to the law governing the use of marijuana.

He said: “…Until the law changes, if you’re found with dope, you ‘gone get’ lock-up.

“Once that law is changed, then, of course, it wouldn’t be criminal anymore.

“You have to look at what the recommendations say.

“It’s only specifics that will be exempted. It’s not that everybody will be able to go out and puff a joint. That will still be illegal.

“Look at the recommendations and see what those are.

“But once it reaches that point, Parliament will of course have to pass legislation to amend the Dangerous Drugs Act or create a new expungement act.

“Right now, we have the Rehabilitation of Offenders Act, so I don’t know which course they are going to take, but whatever [course], I am answerable to it.”

In Parliament on Wednesday, the prime minister said The Bahamas’ “cannabis laws [are] outdated and must change”.

He also announced the government is reviewing the possible legalization of a hemp industry and will advise the public following greater public consultation.

Hemp is a strain of the plant which does not possess the intoxicating cannabinoid, THC, which causes euphoria, and is commonly associated with marijuana.

The Economic Recovery Committee’s executive summary report, which the prime minister tabled this week, recommended the full legalization of cannabis for medicinal, religious, and recreational use with regulatory controls that would allow for the production, manufacturing, sale, consumption, and exportation of the substance.

It recommended the government implement a “hybrid approach that includes decriminalization for small amounts and legalization with strict regulatory control” for economic growth.

As it relates to decriminalization, the ERC proposed possession for the personal use of up to two ounces be allowed for adults, aged 18 and older, and unapproved possession of a greater amount be punishable with a fine.

In its preliminary report in January, the Bahamas National Commission on Marijuana also recommended the decriminalization of possession of small amounts of marijuana — up to one ounce for people 21 and older — and allowing medicinal use of the substance.

Earlier this month, Attorney General Carl Bethel said draftspersons were will working on a draft bill on marijuana.

In July, the attorney general said the bill was expected to be presented to Cabinet “in very short order”.