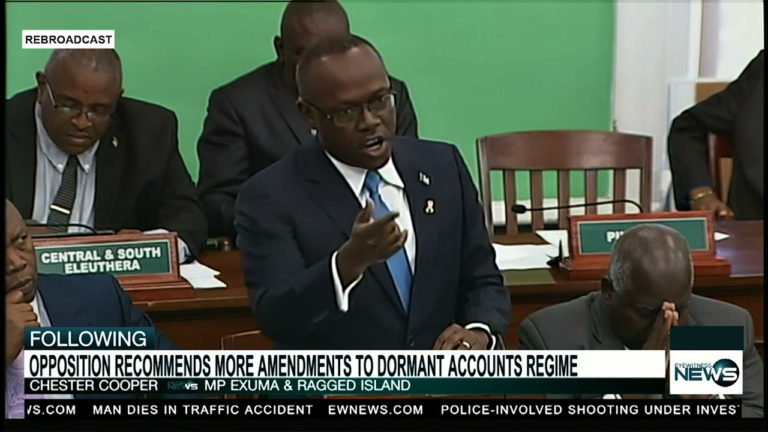 NASSAU, BAHAMAS – Notice should be given to customers before the government embarks on seizing money from dormant bank accounts, an opposition member of parliament suggested in the House of Assembly Wednesday.

“This Bill should require the bank to contact the customer via their last known address or even [print ] a public notice to contact the bank to be informed of pending dormancy, and the bank must be able to demonstrate to have done so,” said Exuma and Ragged Island MP Chester Cooper.

These Bills jointly seek to introduce necessary and important reforms to the dormant account regime in The Bahamas, but according to Cooper, dormancy is often the result of bad customer service.

Referring to section 15 J of the Bank and Trust Regulations Bill,  Cooper said there ought to be a standard which should raise the level of fiduciary responsibility to make reasonable attempts to reach the customer.

These measures, he said, would discourage a cavalier performance on the part of the bank responsible for sending correspondence.

“We want to make sure to not be seen as raiding accounts when the banks themselves have not done the appropriate follow-up,” Cooper claimed.

“The reality is that Bahamians, once they put money aside for a purpose, generally take the view that their money is safe and they have nothing to be concerned about once they have created the deposit.”

Cooper invited the government to examine the laws of the United Kingdom, the United States, Ireland and Japan, where there is a right to reclaim [funds] by the owner, even after the dormancy period.

“We must not disenfranchise customers and their heirs from what might be rightfully theirs, even if there was a timeframe when the matter did not have their attention,” Cooper said.

“The timeframe for reclaim is 100 years in Canada and these provisions can also be examined.

“There is a constitutional point to be made and the question is whether under article 27 (2) [of the existing Bill] if the government can compulsorily acquire money as they do land.”

Cooper said Section 11 of the amendment, which will effectively make the proposed legislation retroactive, will create a windfall for the government – based on those accounts now in the system – without any checks and balances as to whether the banks were prudent in their responsibility to inform the customers of pending dormancy.

While giving his contribution to yesterday’s debate, Prime Minister Dr. Hubert Minnis revealed that the government was advised by the Central Bank, that based on legislative proposals, the Treasurer would receive an initial flow of at least $41.3 million assessed at the end of June 2018, and a further steady stream of transfers as funds meet the 17-year threshold for extinguishment of claims, should they not be claimed. The prime minister said the government is proposing to use the dormant funds to establish a Disaster Relief Fund.

Cooper, however, said funds from dormant bank accounts transferred to the public treasury should not be treated as a source of revenue for the government. He suggested that such funds should be segregated from the Consolidated Fund and earmarked for specific purposes.

“I heard the Prime Minister today about allocating to a disaster fund, however, the Bill says it’s going the consolidated Fund. Everything else, therefore, is just talk as far as I am concerned,” Cooper said.

The Exuma and Ragged Island MP also suggested the government establish a “Reclaim Fund” like the United Kingdom and use the funds for worthwhile purposes.

“For example, we should use this money for investment in Family Island development, youth and sports facilities, or schools, or somewhere where an injection of capital funds could make a difference.”

The opposition MP further highlighted that the money in dormant accounts is not actual revenue. He said even though it makes sense for the State to have a way to deal with these dormant accounts, the money is removed from an account that was opened with every intention of having these funds used by an entity or individual.

Overall, Cooper said there seems to be a level of consumer protection missing as it relates to the proposed amendments.  He, therefore, asked who was looking out for the consumer.

“I suggest that as elected officials we must champion the cause of consumers. What we find is that in banking, public utilities, et cetera, there seems to be more consideration for the entity than the consumers who feed their money into the entity and expect from them a level of care and protection,” Cooper said.