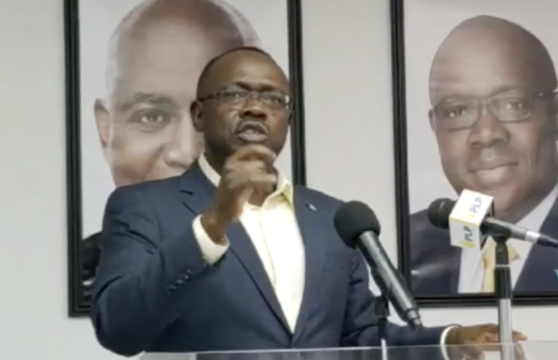 NASSAU, BAHAMAS –  The Opposition has blasted the Minnis administration of being “too focused on managing deficits rather than improving the cost of living and fostering economic growth” as it called into question the credibility of its revenue collection estimates.
“The painful VAT hike that punished Bahamians who voted for this adrift government, seems to have been all for naught,” Chester Cooper, the Progressive Liberal Party (PLP) deputy leader, and Shadow Finance Minister responding to 2019 Fiscal Strategy Report presented to Parliament on Wednesday said.
“More borrowing, likely more cutbacks, more unemployment and a BPL tax as the cherry on top. There is no denying that Hurricane Dorian, the most devastating storm The Bahamas has ever seen, was bound to have an adverse impact on government revenues and expenditure.
“But based on the prime minister’s own characterization, what we see is a lazy government lacking innovation that once again retreats to the pure madness of borrowing and taxation,” said the Exuma and Ragged Island MP.
Cooper continued: “Having borrowed well over $2 billion to date, the government now plans on borrowing another $500 million; not to mention the $650 million Bahamas Power and Light bill this administration plans to stick on the Bahamian people. This is a record level of borrowing.
“It is all as a result of this administration being too focused on managing deficits rather than improving the cost of living and fostering economic growth.
“Had the government focused on fostering a stronger economy the impact of this shock would not have been so sharply felt on the economy. The Bahamian people cannot bear much more.”
Cooper noted the Fiscal Strategy Report did not address the fiscal or economic impact of the pending electricity rate reduction bond.
“The impact of an electricity increase would likely reduce local consumption, which would reduce revenue while increasing what the government itself spends on electricity,” he continued.
“This is a recipe for a recessionary impact on the economy, despite the minister’s protestations. Secondly, where does the report speak to the costs of this new potential borrowing given that it intends to raise $500 million to bolster government coffers and another $650 million to bail out BPL; from the market at the same time?”
“From whom will this money be borrowed and at what rate? We suspect the government does not yet know. How is proper budgeting possible without this information? This is symptomatic of a government bereft of ideas,” Cooper said.
Cooper also called into question the government’s revenue estimates.
“We also don’t believe this report includes a credible estimate of revenue collection, even with the Dorian adjustment,” he said.
“Last year, revenue was over $230 million below target without any hurricane impacting The Bahamas. In the first quarter of this fiscal year, revenue performance was not significantly different from last year.
“So, conservatively revenue might be $400 million below target this year. This means that the borrowing estimate is perhaps $230 million below what it needs to be for the government to function.”
He added: “We also note that the majority of the Inter-American Development Bank contingency loan is still not drawn down.
As a result, there is no potable water in Grand Bahama, hurricane debris remains uncollected in Grand Bahama and the Abacos, and contractors who worked in the immediate aftermath of the storm remain unpaid.
“Government must stay focused on speeding the recovery and restoration efforts as doing otherwise will have a continued dampening impact on the economy.”
The deficit for the fiscal year has increased to $677.5 due to Hurricane Dorian, with the government set to borrow $507.9 million to meet the shortfall.
The economy according to the Fiscal Strategy Report was expected to grow by 1.7 percent in 2020 but is now projected to contract next year by 0.6 percent because of anticipated weakness in tourism activity in the first half of 2020.
For this fiscal year, the government projects revenue loss of $236 million and an expenditure increase of additional $302.6 million.