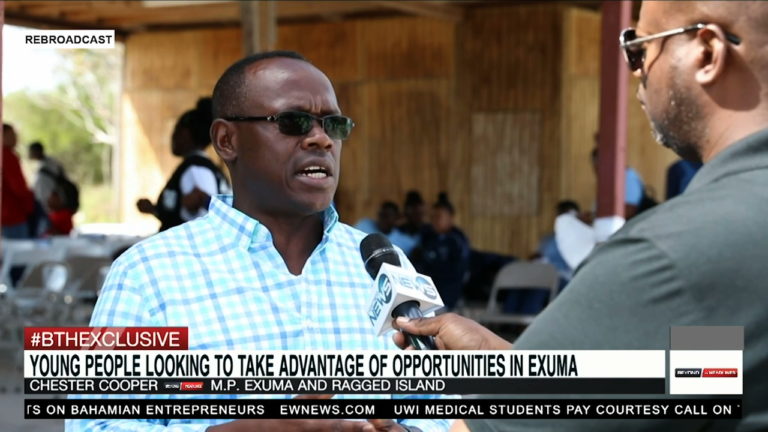 EXUMA, BAHAMAS – While the country’s recent Labour Force Survey has revealed that Family Islands such as Grand Bahama and Abaco have experienced a marked increase in employment statistics, Chester Cooper, member of parliament for Exuma and Ragged Island said employment opportunities on Exuma are booming.

Job openings in the private sector are said to be responsible for the marked increase in employment opportunities throughout the country, according to the Labour Force Survey.

Cooper, while appearing last week on Beyond the Headlines with host Clint Watson, revealed that Exuma has been lucky enough to “always have an abundance of job opportunities.”

He credited the island’s private sector for the huge role it plays in “bountiful employment opportunities.”

“Every young person on this island can have a job. That is just how much opportunity is present here. That is something that many islands cannot say and there are private developers to thank for this, including Sandals Emerald Bay which is the largest private sector employer on the island,” Cooper said.

There are currently 600 associates employed at Sandals Emerald Bay, Exuma and executives at the resort told Eyewitness News Online that the company is looking to increase that number.

Jeremy Mutton, General Manager, Sandals Emerald Bay said the resort has a number of job openings and is hopeful that it will attract interested Bahamians to join its growing team.

“We are often looking for the best talent that is available and have a number of vacancies in most departments at the moment, so we are looking for any Bahamian who may be interested in working at Sandals Emerald Bay,” he said.

The job fair is held every Thursday and provides job seekers with an opportunity to familiarize themselves with the brand and participate in three rounds on interviews.

Successful applicants are contacted within one week and then enrolled in a rigorous training process to ensure that they are the right fit for the resort.

The resort has also partnered with the L.N. Coakley High School on Exuma to provide 12th-grade students with the opportunity to participate in the interviewing process to ensure that they are prepared for the job market upon graduation.

“They have to come with their resume and fill out an application form and we give them feedback on everything,” Mutton shared.

“We put them through the entire interview process, even though they won’t be employed here now, but at least they would be provided with the experience so that they are prepared for the job market once they leave high school.”