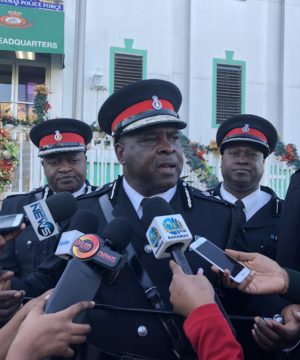 NASSAU, BAHAMAS – As police initially reported that recording artist Devon ‘Mdeez’ Knight was killed during an altercation after a traffic accident on Prince Charles Drive last Friday, June 21, Police Commissioner Anthony Ferguson confirmed yesterday that this “preliminary report” has changed and new details have emerged that points to another scenario.

“When the police gives  you a report in the first instance, it is a preliminary report,” Commissioner Ferguson told the media yesterday on the sidelines of the opening of the police summer camp at the Church of God of Prophecy on East Street.

“We were advised that it was a confrontation and it was during that time that he was stabbed and he drove off and the vehicle crashed.”

However, Eyewitness News Online understands that the recording artist was stabbed at another location and having fled the scene, he crashed at the junction of Fox Hill Road and Prince Charles Drive, later succumbing to his injuries.

Police reported that they have taken a 32-year-old male into custody in connection with this incident.

Yesterday, Commissioner Ferguson said the police should not be accused of failing to inform the media of this latest update as further investigations were conducted, which led police to rule Mdeez’s death as a homicide.

“Actually, as far as I am aware, the investigation is just about completed and we can confirm that it is homicide and we expect to charge somebody very shortly. These are the things that we have when we have these incidents that involve conflict, and this is what we saw, so we have determined that this was a homicide,” Commissioner Ferguson said.

Meanwhile, the death of Mdeez, a popular Jamaican-Bahamian reggae artist has left local entertainers in a state of shock.

Mdeez was expected to begin his 12-week tour this Friday, June 28, and was scheduled to visit the United States, Canada and Jamaica, according to his manager.

Earlier this year, he performed at the Bob Marley birthday celebrations in Kingston, Jamaica.

Mdeez was signed to Tuff Gong International via a distribution deal and he was managed by Royalty and Respect Management.

Mdeez is survived by his wife and two sisters.