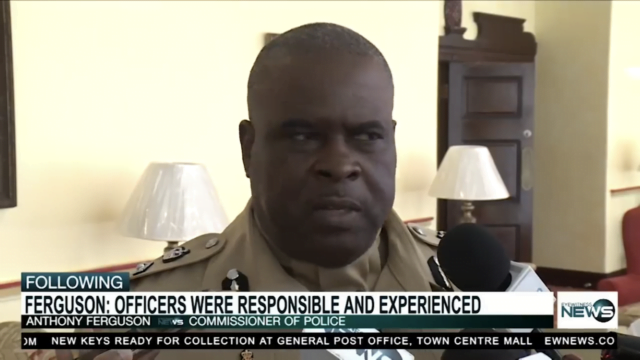 NASSAU, BAHAMAS – Despite the negative reports that have surfaced on social media and on talk shows after a police-involved shooting in the eastern district of New Providence some two weeks ago, Royal Bahamas Police Force Commissioner Anthony Ferguson expressed on Monday that he stands by the actions of his officers.

“Let me say the officers who were on the operation were very responsible and very experienced officers, and that is as much as I will say in respect to that.”

On May 17, three men were killed during a police-involved shooting, which occurred on New Gate Road in eastern New Providence.  Since then, many relatives of the victims have publicly contested the findings of the report issued by police.

Yesterday, Commissioner Ferguson admitted that he has not been following the issue.

“I don’t know what the family said and I’m not going to try to speak to what they say,” Commissioner Ferguson said.

“You always have to remember that the police department is the legitimate law enforcement agency.

“And, until I fully understand what is being said, then I will be able to analyze all of the pros and cons, but I cannot speak to anything that anyone would have said. It’s a disadvantage for me to try to speak to something I have not seen or heard.”

According to police, the suspects approached them with handguns when they entered the home, which resulted in them being shot.

Police confirmed that the suspects used children as a human shield during the crossfire.

Hilton, Smith, and Morely were granted bail by the Supreme Court Justice, Willamae McKay, with two sureties. Smith is also expected to be temporarily electronically monitored by law enforcement during her bail tenure.