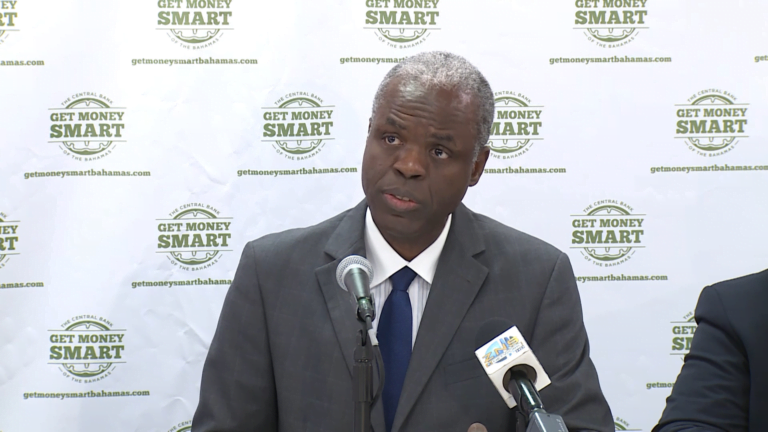 But the economy could still contract in 2020, says Central Bank gov.

NASSAU, BAHAMAS –  The Commercial banks have been able to withstand the ‘shock’ of Hurricane Dorian without encountering any major balance sheet stress, according to Central Bank Governor John Rolle.

Rolle noted just under 10 percent of commercial bank loans to the private sector were to borrowers on Abaco and Grand Bahama.

He was speaking at a Monetary Policy Committee press briefing at the Central Bank yesterday.

Rolle said the delinquency rates on these islands have risen since last September, as expected.

“This has not halted the countrywide fall in the non-performing loan rates—the fraction of loans that are at least three months behind in payments— which was estimated at 8.1 percent at the end of December 2019,” he said.

“The full extent of financial strain in the damaged zones will become more apparent after borrowers, especially in Grand Bahama, have exhausted the grace periods they were granted by commercial banks.

“Nevertheless, the banks have seen a good volume of credit repayment from insurance claims payouts.”

Rolle continued: “This strengthens the Central Bank’s position on the general importance of hurricane insurance coverage to uphold the stability of banks and to protect depositors, where lending is of a long-term nature involving mortgages.

“As a general comment, and unrelated to the hurricane experience, lending to the private sector was still subdued but expanded in 2019 after an overall reduction in 2018. The Central Bank expects that there will still be a cautious element to lending in 2020, but with further growth.

The governor noted that ‘tens of millions of dollars’ in loan balances have been paid down on Abaco and Grand Bahama, adding this has helped cushion the bank.

Rolle said from all indications the Bahamian economy grew slower in 2019 than in 2018.

“It reflected the losses caused by Hurricane Dorian, which limited the returns from tourism,” he said.

“Aside from the setback in Abaco and Grand Bahama, the tourism industry was still healthy, given some important shifts in demand to the undamaged islands of the archipelago; and the magnitude of growth experienced over the first half of the year before the storm hit.

“In this outcome, there continued to be a strong expansion in the vacation rental market. Foreign investment activity also provided steady stimulus through construction activity, with the onset of hurricane rebuilding efforts beginning to have similar effects.”

“The economy could still contract in 2020, as neither construction efforts nor the pickup in business elsewhere in The Bahamas might fully compensate for the absence of a meaningful tourism contribution from Abaco and Grand Bahama during the peak of the season.”

Rolle noted that the dependence on imports for rebuilding is likely to cause a deduction from the GDP estimate, even though The Bahamas will have more than ample access to foreign exchange to pay for such spending.

“This includes reinsurance payouts, the surplus foreign reserves which tourism helped to provide, and the increased access to foreign currency borrowing that the government will have,” he said.

“It is important to note that the economy has always been subjected to such foreign exchange needs after setbacks. Hence, the emphasis during good times to ensure that access through these channels continues to be strengthened.

“Now it is most important to ensure that the rebuilding happens on an efficient timeline, which from the Central Bank’s estimate would be signaled from a comfortable drawdown in the reserves during 2020–even to the point that the balances fall modestly lower than they were at the end of 2018. At the end of 2019, the external reserves reached $1.7 billion, which was more than $500 million above the closing balances for 2018,” he said.

“There is still some additional inflows expected from borrowing and reinsurances that would pass through the balances during 2020.”

While the government will borrow $587.9m post Hurricane Dorian, Governor Rolle said there was no need to be “too concerned or alarmist” about the government having to borrow under such circumstances.

“If the government is unable to bow because it does have the capacity to bowl your economy will have a more negative outcome overall,” he said.

“What we want to to focus on is using the opportunity to provide support for the economy. After you have recovered, re-intensify your focus on reducing your debt so that if you need to borrow in the future you can and people are willing to lend.”