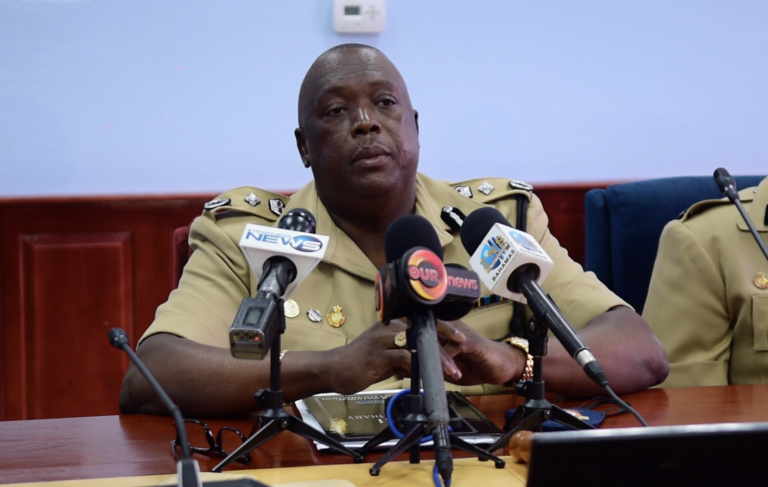 NASSAU, BAHAMAS — Commissioner of Police Paul Rolle said he does not see political colors nor does he take instructions from politicians.

He was responding to questions surrounding the detainment of Democratic National Alliance (DNA) Leader Arinthia Komolafe and at least eight other DNA members, including DNA Chairman Omar Smith, over a March 3 demonstration in front of Parliament.

“The commissioner of police answers to the Constitution of the Commonwealth of The Bahamas,” Rolle said at Police Headquarters.

“I do not take instructions from politicians.”

The DNA leader and other senior members were called to the Central Police Station, where they were detained for more than five hours as supporters and other political figures showed up outside in support and for their release.

Yesterday, Rolle said the party did not obtain a permit to hold its demonstration three weeks ago.

He said when the planned event was brought to his attention, he advised an officer to ask the demonstrators to disperse, noting that the police force will deal with the matter later.

However, the commissioner said demonstrators sought to gain access to Parliament “forcibly”.

“The group of persons were at the Parliament, Parliament was in session and these persons attempted to forcibly gain their way into the Parliament that was sitting at the time,” he said.

“They did not have any permissions, again, to demonstrate, as required by the law, and I instructed the officers at the time not to arrest anybody, but that we would deal with it later by way of summons — where we’ll just invite persons in, so as not to create a scene, an unnecessary scene at the Parliament…”

According to the commissioner, the officer in charge of the Central Division, whom he said had carriage of the matter, invited nine people to the station to be interviewed in relation to the alleged breaches.

He explained: “I learned that there was a media circus gathered at the Central Police Station.

“I wanted to find out what was going on and so I went down myself and I spoke with a few of the persons [who] the officers had invited in, as well as some of the attorneys.

“They were all aware of what was going on and I indicated to them, as I would say to you today, that when the officers have completed their investigations, I will meet with [the relevant individuals], the file will come to me and I will make a final decision on that at the time, which I will communicate with and to the persons concerned.

“That is the essence of what today is all about.”

When asked to confirm the number of people questioned, Rolle said he had a list of nine names.

The commissioner said this is not the first time a group has attempted to enter the House of Assembly to demonstrate and the police force’s response has been the same in each instance.

He insisted that no matter who sits in Parliament, “we have a duty to provide protection for those members”.

Asked why the DNA members were arrested when they were only asked to come in for questioning, Rolle said he did not wish to get into the legal aspects of the matter.

Typically, when police question individuals on matters under investigation at a police station, they are considered detained and in police custody.

“In order for the police to interview persons, we complete the detention record and, like I said, I have spoken to all of the attorneys and they understand that is a normal process,” Rolle said.

The commissioner was asked to respond to assertions that the police force sought to silence individuals such as the DNA leader.

“Not at all because we have [not] done anything to prevent Mrs Komolafe from getting her message out,” he said.

“And I encourage persons to get their message out.

“What we simply say is to do it right, you see. You can’t block up the whole city.

“We were not aware, and I learned that the streets were blocked.”

Rolle said others have sought to demonstrate in other areas, and while the police force is not seeking to stifle them, they must let police know “because we have to protect you, too”.

He added: “It is not about the commissioner flaunting his authority; it is about protecting those demonstrators because we would hate to know that persons are demonstrating and a different group pounces upon them and then you have a different problem.”