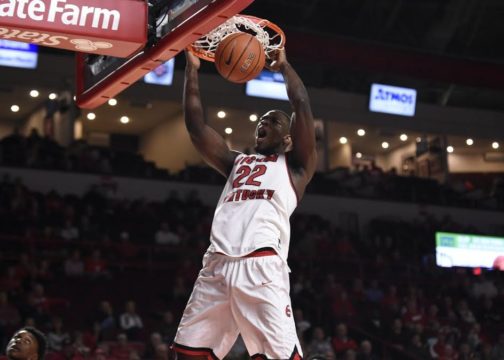 Dwight Coleby has the Western Kentucky University (WKU) Hilltoppers men’s basketball team in a position where most didn’t predict they would end up at the beginning of the season.

Behind Coleby’s 16 points, 13 rebounds and three blocks, the No.4 seed Hilltoppers beat No. 2 seed Oklahoma State 92-84 on Wednesday night at the Gallagher-Iba Arena in Stillwater, Oklahoma.

Coleby had it rolling in the paint, as all seven of his made field goals came on duns or layups. He finished 7-for-10 from the field, helping WKU to a 52.5 shooting percentage.

“Coach preached all season that we have got to get the ball inside the post, play inside out and put pressure on the defense by attacking,” Coleby said.

“Our guards did a great job of feeding the post and driving the ball in there. That’s how we put pressure on the defense. It worked for us.”

Coleby left Kansas last summer with the hopes of getting meaningful minutes in his final season, and so far, the move has paid off.

“For a guy like Coleby, who hasn’t had a lot of opportunities, to come in and do what he’s done this year, I’m proud for him.”

The double-double against Oklahoma State was his first since January 27 and his 10th of the season. Coleby also gave WKU a spark on Monday in an NIT second-round win over the University of Southern California. He scored 13 points and made some tough plays on defense down the stretch in WKU’s 79-75 victory.