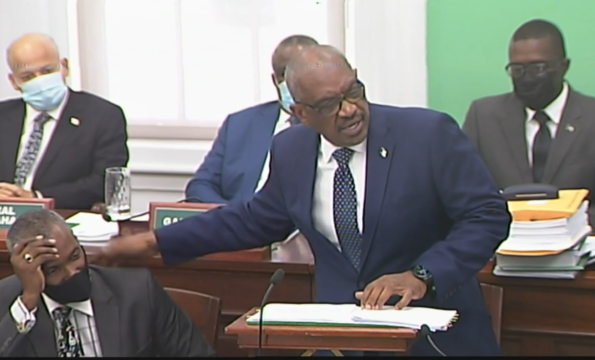 NASSAU, BAHAMAS — Prime Minister Dr Hubert Minnis said yesterday that if the Free National Movement (FNM) is successful in being re-elected to office, he and Deputy Prime Minister Desmond Bannister will do something that has never been done in The Bahamas: “split” the leadership of the government.

The prime minister made the statement while leading the mid-year budget debate in Parliament.

“The deputy prime minister and I have a commitment,” Minnis said.

“And, I want to concentrate on Bahamian ownership.”

There was a round of banging on the table from the governing side.

“I want to confine myself as prime minister in the next term just to those components and he (patting Bannister on the shoulder) will run the rest of the government.

“Let me confine myself to that.

“So, we’re going to split. It has never been done before, but it will be more effective…especially when you have a great relationship…”

Bannister has not yet been ratified in the upcoming general election.

“I think he has something for y’all.

“Mr Speaker, it was just like when I said years ago that as prime minister, I will accept no ministry.

“I was lambasted left, right and center. ‘What dumb idea is that’; this and that. They had never heard it. Now, it is the best thing that happened.

As he paused to reflect on the women who helped to shape him, Minnis said he believes in equality and his “greatest dream is to one day see a female prime minister in The Bahamas”.

He said his early childhood, career and adult life were successful because of women.

While in opposition, former Long Island MP Loretta Butler-Turner challenged Minnis twice for the leadership of the FNM without success.

Turner, the only female FNM MP following the party’s defeat in 2012, went on to become the first female leader of the opposition after she and six other FNM MPs wrote to the governor general expressing a lack of confidence in Minnis.

However, neither she nor the six FNM MPs who joined her, were ultimately given the nod from the party to run in their respective constituencies, quelling their chances of re-election and Butler-Turner’s prospects for becoming the first female prime minister.

Butler-Turner ran as an independent and lost to the FNM’s Adrian Gibson.

The only woman in the Minnis administration’s Cabinet, Lanisha Rolle, resigned as minister of youth, sports and culture last week.

Good Morning Prime Minister i applaud you for the great work you have done. This country would be corrupt without your governance. Hold your head up high and continue the great work you are doing. Yes there are many members who have resigned but they wanted to lead their own way. The PLP, i am sorry is not the way forward. Bahamians let us be thinkers and doers and vote for the government of change and not shame.

Good night Mr. Prime Minister, I love your thought of splitting the leadership when elected, you’re the only PM the Bahamas has had that went through times like this, when you won the government on the slogan the people time, you won it with this country going on a blacklist, 3 major hurricanes, and then the worst to come COVID 19, COVID 19 is a epidemic which touches the world over and it spares no one weather you were black, white, yellow, red, purple or what and if the PLP wants to campaign on the covid 19 they will loose poorly because people with since will understand all they want is power, in past governing of this country it has been proven that the PLP wasted more of the country funds and the FNM has to clean up their dirt, I would like to see my MP who’s now DPM go for it one more time, the people of Carmichael wants Desmond Bannister, if you send any one else then the PLP will have that seat.

mr PM sir you promise three( things on your exceptions speech sir if u want us to wipe away all of the mistakes made by F , N M’S an respect u an the
party you must first GIVE US A FREEDOM OF INFORMATION ACT , US AS IN BAHAMIAN ,!