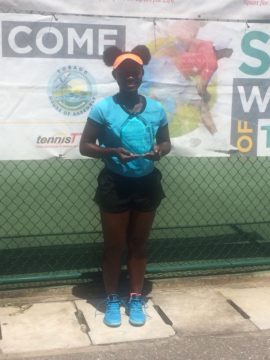 Clarke jumped out to an impressive start, easily winning the first set of the championship match, and managed to come from behind in the second to complete the sweep.

“I feel so proud of myself,” Clarke said after the match. “I wanted to come in and win in both singles and doubles, and I was able to get it done. I thank everyone that supported me, and look to keep it going at my next event, which begins on Monday in Antigua.”

Clarke will play both doubles and singles matches at the Wadadii Bowl in Antigua and Barbuda.