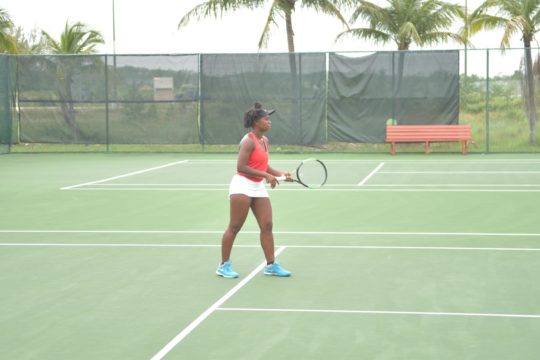 Sydney Clarke was the only Bahamian to compete on the clay yesterday, as the annual Junkanoo Bowl tournament continued at the National Tennis Centre.

Clarke and her American teammate Kriti Williams fell 12-10 in a tiebreaker to Dharani Niroshan and Gabriela Singer in doubles action. Clarke and Williams lost the first set 4-6, but bounced back to take the second set 6-3. Clarke also lost to Niroshan earlier in the day in the girls’ singles as well.

This year’s tournament featured several players ranked in the top 1,000 in the world in their respective divisions. According to event organizer Wes Rolle, playing advanced competition more frequently is what local players need in order to move up the world ranks.

“We had some really good players come in for this tournament,” Rolle said.

“In fact, this event was so good, I’m glad we have some more international competitors coming in later in the year.

“Although you always want your players to win, sometimes they have to be exposed to a level where they might not be comfortable right away.

“But most times that leads to growth. It shows them what steps they need to take in order to improve to a point that they can compete against the top athletes.”

Several of the country’s top players participated in the tournament, including Jacobi Bain, Abigail Simms and Gabriel Simms.

“We had people from Thailand, France and the United States. We had girls ranked a low as 300 in the world so, that tells what kind of competition this was,” said Bahamas Lawn Tennis Association (BLTA) Public Relations Officer Perry Newton.

“Our players did ok. However, until we get those finals wins and finals appearances, we still have a lot of work to do.”