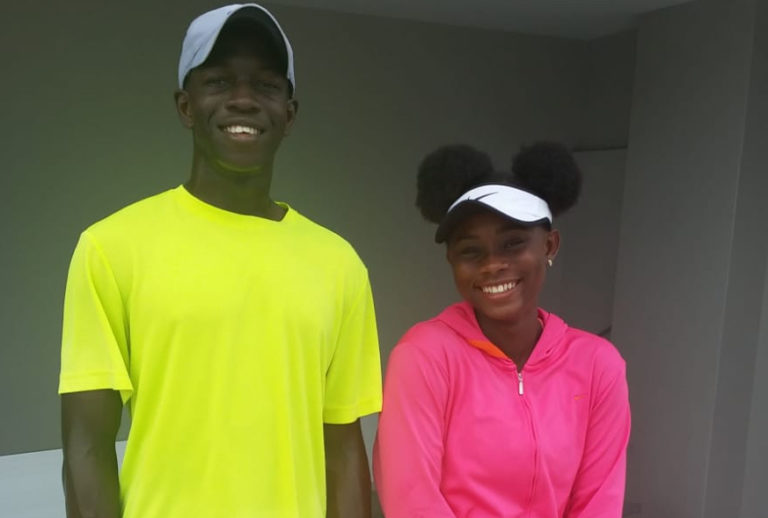 Local tennis players are on a roll in Trinidad and Tobago, picking up wins in singles action yesterday as the 2018 International Tennis Federation (ITF) Tobago Jr. Championships continued.

In girls singles, Sydney Clarke won her quarterfinal match against Sifa Butcher from the United States in two sets (6-3, 6-2).
“I felt like I was able to play well today, however, I do need to focus a bit more during the match,” said Clarke after the win. “I had a few errors that I wasn’t happy about, but overall I played well and fought to the finish. I feel like I played like I wanted to win, and I hope I can keep it going to make it to the finals of this tournament.”
In boys singles, Donte Armbrister won his quarterfinal match over Ty Switzer from the United States, 6-3, 6-2.
“I was up 3-1 in the first set when the rain came down, so, it was tough to try and gain back the momentum I had to start the match,” Armbrister said. “I think I played a clean match. I was able to break him and my serve really helped me with that.  I picked things up in the second set and really played a good set to close out the match. I’m grateful for the win and I look to continue this level of play in my next set.”
Both Clarke and Armbrister will compete in singles and doubles matches today as they look to qualify for the finals in both singles and doubles competition.
Clarke is playing in the doubles division with Riley Codrington from Barbados, while Armbrister is teaming up with Romani Myers also from Barbados.