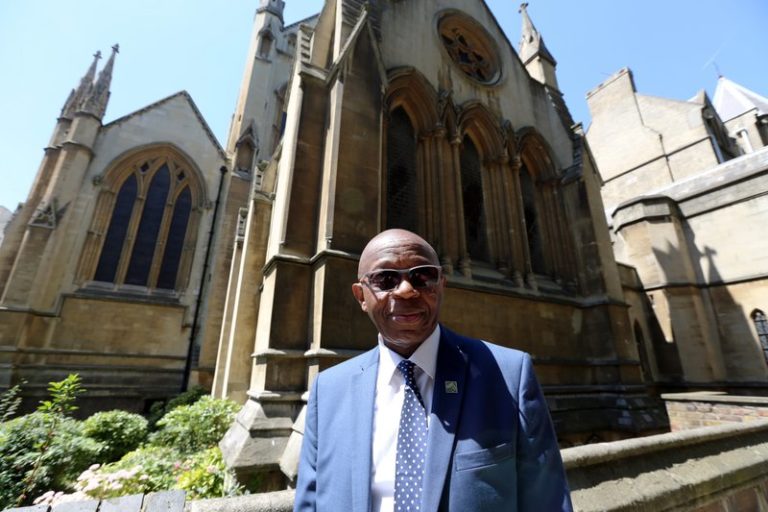 In this photo taken on Wednesday June 27, 2018, Pentecostal Bishop Dr. Joe Aldred, of the Church of God of Prophecy, stands in front of Catholic Apostolic Church of Christ the King in Bloomsbury, London. Looking to reverse dwindling membership, The Church of England is launching new outreach, especially aimed at younger members, to other Christian congregations, in a move that could bring some Holy Rolling, New World preaching styles to its venerable halls of stone and sacrament. Joe Aldred, a Jamaican-born Pentecostal bishop, welcomes the upcoming partnerships, saying: “The church doesn’t need legislation that keeps the people of God from each other.” (AP Photo/Robert Stevens)

LONDON (AP) — The Church of England owns some of the most impressive houses of worship in the world, with towering facades and spires that have drawn in the faithful for close to 500 years. But these days, that’s not enough to fill the pews.

Looking to reverse dwindling membership, Church leaders are launching a new outreach to other Christian congregations, in a move that could bring some Holy Rolling, New World preaching styles to its venerable halls of stone and sacrament.

A proposal likely to be approved on Friday would devolve some authority and allow local bishops to decide who from outside the Church of England can come perform sermons at its churches, without prior approval of the Archbishops of Canterbury and York, as is currently the case.

That means it’s likely that more expressive, evangelical preaching styles including gospel could be making their way to the pulpit, like that of Bishop Michael Curry, whose passionate sermon about the power of love stirred up the royal wedding.

“The Church of England thinks it can make itself more attractive by resorting to style, said Gavin Ashenden, a former chaplain to Queen Elizabeth II. “It’s the end of the snobbishness that the Church of England has confined itself with,” he said, adding that he hoped easier partnerships with other denominations would bring fresh inspiration to preaching styles.

The C of E, England’s state church, was founded after a schism with the papacy in the 16th century, and its traditions are at the heart of what came to be known outside Britain as Anglicanism, or the Episcopalian Church, one of the world’s largest Protestant Christian followings.

But membership in the English heartland has been shrinking over the years, as Britain’s population ages, and the average Church of England member today is 68 years old, despite successive attempts by Church leaders to boost appeal. Ashenden fears the Church could suffer a “demographic meltdown.”

While membership in traditional churches has been consistently falling in the West, the growth of the newer ones has clearly bucked the trend, raising eyebrows across the faiths.

The Church of England says that the new rules, set to pass a final approval at its July 6 synod, or council meeting, build on previous efforts to expand partnerships and help unify those who spread the Christian faith. Many pastors from the independent churches it already recognizes give sermons already at the Church of England. But the new rules could bring in even more, including some from primarily black congregations.

“At grassroots level there are already many vibrant examples of churches working together. It can only be a good thing to have that happening more intentionally,” said Chris Cartwright, the General Superintendent of the Elim Pentecostal Church.

The changes do however run the risk of provoking a culture shock among longtime members not familiar with more raucous preaching traditions, and some groups even carry stricter beliefs and practices like speaking in tongues that could appear shocking to more tradition churchgoers.

Liberal Anglicans, for example, may not like the strict biblical message of Pentecostal believers, or the social conservatism of The Church of Pentecost, which opposes abortion and gay marriage.

Joe Aldred, a Jamaican-born Pentecostal bishop with the Church of God of Prophecy, said that differences extend to beliefs and practices.

“Speaking in tongues is an essential part of the Pentecostal church,” he said, as is a strong belief in miracles and more literal interpretations of the Bible as compared with Anglican denominations. Still, he welcomes the upcoming partnerships, saying: “The church doesn’t need legislation that keeps the people of God from each other.”

Charles Teddy Adupong, leader of a London district of the Church of Pentecost-UK, and pastor of a black-majority congregation, also welcomes the amendment.

Experts believe the changes alone won’t be enough to revive Church of England support to past levels, but it could help stem losses.

This article was written by ROBERT STEVENS, Associated Press writer.