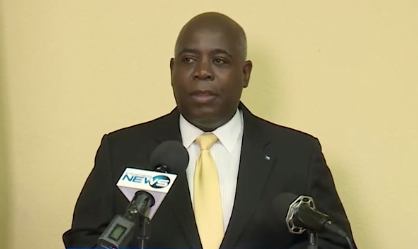 NASSAU, BAHAMAS — While the last Progressive Liberal Party (PLP) administration failed to hold their ministers accountable, PLP Leader Philip Brave Davis said yesterday that should he be elected as prime minister, he would hold his ministers and MPs accountable if they exhibit inappropriate conduct or behavior.

Davis was responding to questions from the media regarding the resignation of former Minister of Youth, Sports and Culture Lanisha Rolle — who is the fourth minister to resign during the current term.

A statement from the Cabinet Office advised that Rolle’s resignation was accepted as certain matters were brought to the attention of the prime minister and are being investigated.

Despite the optics, Free National Movement (FNM) ministers have insisted the prime minister is simply keeping his word in holding his ministers accountable — something the last PLP administration failed to do.

Several ministers in Christie’s Cabinet were embroiled in scandal throughout his last term, though none were fired or made to resign for their actions.

However, Davis said the FNM party is simply playing the “blame game”.

He said: “That is not a principle upon which a government should operate. They are a government. The manner in which Christie conducted his affairs ought not to be the yardstick by which…Minnis would run his Cabinet.”

However, Davis insisted: “The dismissal or the resignation of these ministers is not holding them accountable because he is as equally culpable, in my view, as these ministers.”

He added: “The question is [whether] these ministers are following the leader and because I am a leader, I stay and you go. So, to draw Christie in this and to draw in his matter of conduct of how he managed his Cabinet, it’s nothing but a red herring.”

The PLP leader asserted that should he be elected prime minister, “I would hold them as accountable as they ought to” be.

“We will be transparent; we will be answerable to the public,” Davis said.

“We will, for example, respond to queries by the press. We’ll make ourselves available to you to raise matters of concern and of public interest that touch and concern any areas of our governance, including expenditure funds, including conduct and behavior of either one of my members and that’s what we will do. Unlike this government.”

Upon coming into office, Minnis sent a stern warning to his ministers, assuring they would be fired immediately if found being involved in anything unsavory or unethical.

At the time, the prime minister told permanent secretaries to report such behavior and not allow it to fester or face the same fate.

Although the government tabled both the Integrity Commission Bill and the Ombudsman Bill in 2017, neither have been advanced to debate.