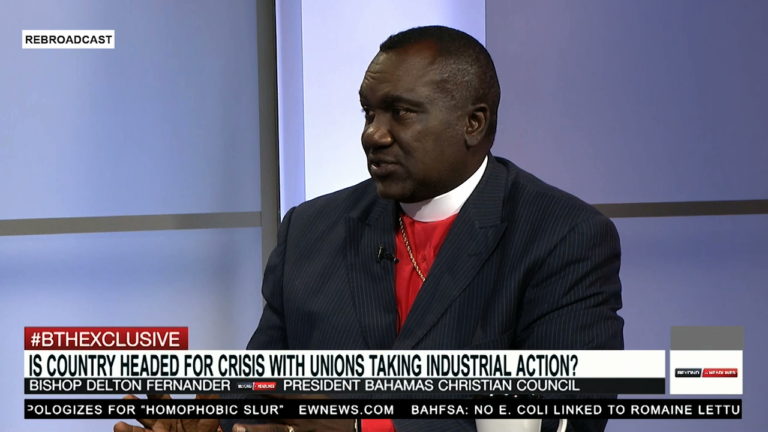 Says church is prepared to step in

NASSAU, BAHAMAS – As union unrest appears to have reached a fever pitch in the country, with various unions striking or filing trade disputes, president of the Bahamas Christian Council Bishop Delton Fernander said neutral mediators must step in to restore calm and bring forth a resolution.

“We need someone to come in who does not have an agenda and just simply want solutions, and simply want these things to move to a place of resolution and completion,” Bishop Fernander said.

“I believe that there are enough people in The Bahamas who are willing to step in and say ‘wait a minute now, what we really don’t want is for this to turn into a massive force where we are doing things that don’t benefit any of us’ because any of that type of action moves us back rather than forward.”

The Christian Council president was a special guest Thursday on Eyewitness News Beyond the Headlines with host Clint Watson.

Bishop Fernander said if the need arises, the church is prepared to step in and act as a mediator for the ongoing union unrest in the country.

“We have some trained mediators and negotiators,” he said. “This has happened before I became president and the record would show that they [union leaders] have called on the Christian leaders. They wanted to step in and they were able to bring resolution to the matters.

“It’s not because we have some special formula, but because it is somebody who has no agenda other than bringing closure to the matter.”

Bishop Fernander said all sides who are negotiating must come to some sort of compromise to move forward and all issues must be examined.

“It’s  not necessarily we fight over the points [of contention],” Fernander said.

“We can lay the cards on the table and say this is where we are at, and this is what we can do based on growth factors and where we want to go, and let’s work within this margin and see what we can realistically do.”

Asked if a request was made for the church to step in as mediator in the face of the ongoing industrial unrest, Bishop Fernander said he was speaking publicly so that unions would be aware that they are willing to help.

“All parties know that we are always there and if we get in a closed room we are able to hear both sides, we can come to some resolution.”

Bishop Fernander said if the country goes into shutdown mode as a result of union unrest, it would not only affect the tourism industry, but it would also shut down the economy.

Earlier this week, The Bahamas Union of Teachers filed a strike vote on behalf of teachers at the C.H. Reeves Junior High School, who are fed-up with the working conditions and the government’s failure to address their demands.

Senior physicians in the country also led three days of industrial action this week, ceasing elective services in the public healthcare sector. According to the Consultant Physicians Staff Association, the move was triggered by failed negotiations after more than 18 months.

Nurses and junior doctors are also in the process of advancing plans to request a strike vote.

Also earlier this month, The Bahamas Hotel Catering and Allied Workers Union (BHCAWU) issued a cease order for all Atlantis Resort and Casino hoteliers who participate in work activities outside of their job description as the union began work to rule in response to what it claimed were breaches of its members’ rights. According to BHCAWU President Darrin Woods, the resort implemented in September a 12-point disciplinary system that negatively impacts workers and their benefits, and introduced a new shift system for housekeepers — all without the agreement or input of the union. Woods said the union’s members voted during a special call meeting that month to take action. The union also filed a trade dispute with the Department of Labour.

Last month, more than 200 nurses left their post and stood outside the Princess Margaret Hospital to express their displeasure with the Public Hospitals Authority’s newly-announced shift change; many saying that they would quit if forced to work a five-day shift period versus a four.