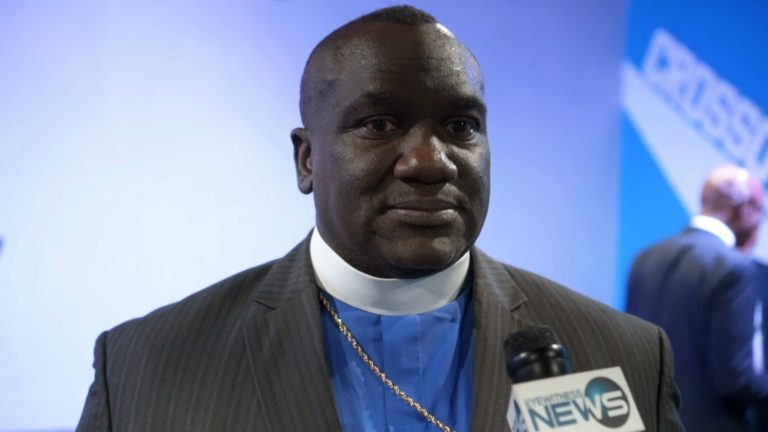 Fernander: We must stand against Sodom and Gomorrah

BCC President Bishop Delton Fernander said yesterday the church must stand up and ring the bell against the celebration of something that contravenes the word of God.

He said the church will also call upon its global colleagues to “stand against Sodom and Gomorrah”, noting pride organizers are collaborating with international partners.

“We will rally for the cause of Jesus Christ and we are asking all Christian in the Commonwealth of The Bahamas to stand with your church; stand with the belief that you believe in maybe this is a time when we must stand against Sodom and Gomorrah.

“This is a time when the church must be the church if it is that The Bahamas still loves Jesus Christ. We will ring the bell and we will call this nation to God. We are not backing down. We will be as forceful as we need to be to rally the church, so that we can show this nation that Jesus Christ is still Lord.”

The first potential event is a Night of Hope rally next month.

Fernander said the event was focused on rebuild efforts in the aftermath of Hurricane Dorian, but the council is considering expanding to also focus on the rebuilding Christian values.

The announcement of the pride event earlier this year prompted contentious national debate on the issue. A flurry of mixed commentary appeared on social media, though many comments were expressions of disapproval.

In a statement Sunday, the council said if the event was similar to those held in other jurisdictions, which allows varying degrees of nudity and “vulgar behavior”, it would violate decency laws.

It also suggested the event contravenes the preamble of the constitution with speaks to the nation’s foundation of Christian values.

Human rights advocate and spokesperson Alexus D’Marco has said the week-long event would be held in a “safe space and enabling environment”.

She has maintained the event would be designed to fit the “culture context” and climate of the nation, and would not mirror jurisdictions such as the United States or countries in Europe where members of the Lesbian, Gay, Bisexual, Transgender and Intersex community parade through the streets.

Instead, the group plans to use private and inclusive safe spaces to host an opening ceremony and flag-raising and a series of other awareness-building events under the theme: “The Rebirth of Pride Bahamas Centering LGBTIQA people in the Bahamas’ Future”.

However, in its statement, the Christian Council said it will not sit idle and allow an “immoral week”.

The BCC said: “Over the years, we have seen the social and moral impact of the introduction of Bahamas Carnival where men and women have been allowed to parade nearly nude throughout the streets of our country without restraint, performing all manner of contemptible and sexual acts on one another in full view of our children and the elderly.

“Pride events would have a further eroding effect of our historic and commonly accepted norms of decency in public behavior.”

The launch of Pride Bahamas was originally slated for May 2020, around the same time as Bahamas Carnival (formerly Bahamas Junkanoo Carnival) — another event the BCC strongly objected to— but was later announced for October 5-12, 2020.

In the months ahead of carnival’s debut in May 2015, the council charged that the event will encourage “promiscuity, fornication, rape, incest and other sins of the flesh”.

Last night, Bahamas Pride spokesperson Alexus D’Marco accused the council of seeking to misrepresent the LGBT community and its movement.

D’Marco said at the heart of this movement are discussions around how the country can respect, tolerate and include LGBTI Bahamians.

“Nowhere in the conversation is the domination of the church or the religious,” D’Marco said.

“We aimed to bring religious LGBTI persons and allies together to celebrate their faith.

She continued: “As much as The Bahamas Christian Council tries to misrepresent the LGBTI community and the movement, the proof of the pudding is in the eating.

Rights Bahamas has expressed full support of the planned event and called on authorities to give the organizers support and protection to make the event a reality.

In 2014, a weekend pride celebration was held for the LBGT community at an all-inclusive resort in eastern Grand Bahama.

Pride events are staged in other Caribbean countries including Jamaica, Trinidad and Tobago, Bermuda, and Barbados.