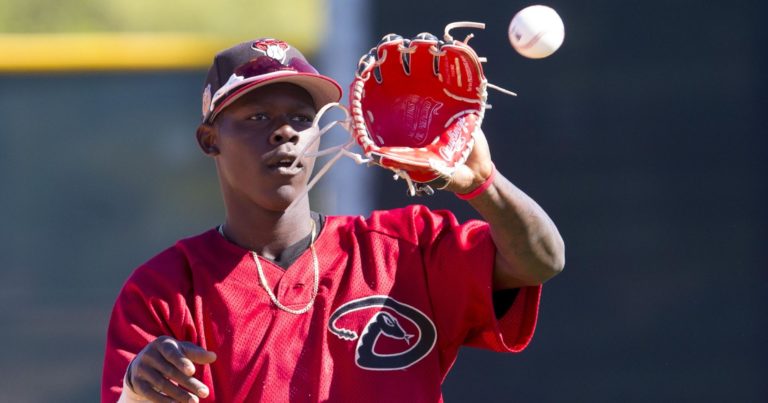 After having his season cut short due to injury last year, top-ranked minor league prospect Jasrado Chisholm said he is excited to be back to full strength this season.

Chisholm, who is the fourth-ranked prospect in the Arizona Diamondbacks organization, tore his meniscus on May 14, 2017 in batting practice, ending his season at 29 games. Chisholm was in the midst of a six-game hitting streak that boosted his batting average to .248.

“I feel like rehab is more of a grind than the season. It’s just you by yourself, not really communicating with anybody.

“It’s a real struggle knowing that you’re hurt. You’re back at the bottom again. Doing that was really a lonely process.”

The 20-year-old said not being able to compete with his team on a nightly basis gave him a deeper appreciation for the game.

“It gave me way more love for the game,” he said.

“I have way more respect for the game. I’m very excited to get back on track.”

After Friday’s 9-6 loss to Beloit, Chisholm had played 98 professional games, hitting .273 with 12 home runs and 54 runs batted (RBIs), although he has piled up 123 strikeouts.

“His whole thing is what a lot of young guys go through, finding a way to be consistent with it. I saw him do some special things at spring training in Arizona, both with the glove and the bat. We’re going to see that here.

“I think he’ll have his moments where he makes everyone in the ballpark go, ‘wow’. That’s what he’s capable of doing. It’s our job as coaches to bring those ‘wows’ out more often.”

Cougars hitting coach Rick Short said he realizes Chisholm’s potential and that he’s working with him daily to get him where he needs to be to get to the major league.

“All the tools are there,” Short said.

Randy Smith is the producer of the widely-watched local television show “Beyond The Headlines” and the web content manager of Eyewitness News. He joined Eyewitness News as a sportscaster in 2018, a role he still performs, and has previously covered a slew of international sporting events, including the 2015 Pan American Games, the Nike EYBL Showcase, several IAAF World Relays, the FIFA Beach Soccer World Cup, the Commonwealth Youth Games, the Bahamas Bowl and multiple CARIFTA Swimming and Track & Field Championships. Randy has been recognized by the Bahamas Press Club with awards for “Best Sports Broadcast” as a sportscaster and “Best TV Talk Show” as a producer. View all posts by Randy Smith →