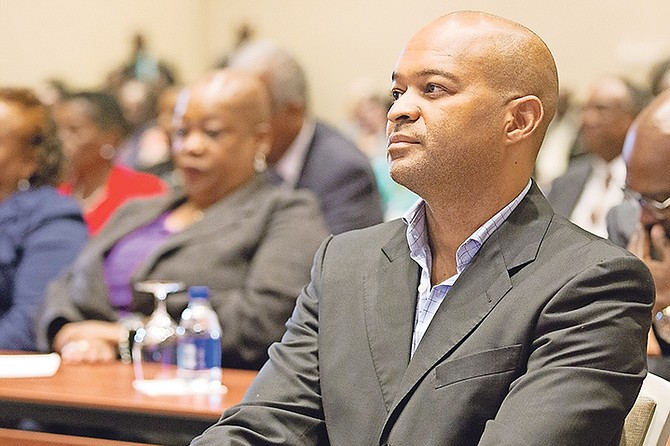 I don’t think anyone was shocked by Centreville MP, Reece Chipman’s resignation from the Free National Movement (FNM) last week. In fact, after the news broke many wondered what took him so long.

Carl Culmer, the FNM’s Chairman expressed surprise that Chipman did not notify party executives or his constituency officers before he announced his resignation in the party’s WhatsApp group. But, while no man knew the hour, they certainly should have expected it.

Chipman has not exactly been tightlipped about his displeasure at the way his former party had been handling certain matters of national importance, leading many people to speculate that he was on his way out. He said the government’s recent handling of Hurricane Dorian, among other issues, led him to move on from the FNM.

In responding to the resignation, Prime Minister Dr. Hubert Minnis appeared unbothered, saying he’s focused on building The Bahamas, not on Chipman’s resignation. In other words, don’t let the door hit you.

Chipman, a man who gained national attention after defeating longtime Centreville MP, Perry Christie by just four votes, has had a rocky journey in the FNM.

He was one of the few FNM MPs who had publicly taken the Minnis administration to task for increasing value-added tax (VAT), considering how critical it was of the tax when it was in Opposition.

In March, he was fired as chairman of the Antiquities, Monuments and Museums Corporation allegedly due to his handling of the AAMC. The public was never told if it was malfeasance, misfeasance or nonfeasance. In fact, nothing was said. The prime minister gave him an ultimatum: resign or be fired. Chipman refused to leave, saying he would only go if other high-ranking government officials at the AMMC also resigned. That didn’t happen and he was later terminated.

He also resigned from the Public Accounts Committee citing the failure of the committee to conduct its business.

Most recently, Chipman had been very critical of the government’s decision to lease the Town Centre Mall from businessman and former Cabinet minister, Brent Symonette.

During a news conference last week to announce his resignation, Chipman spoke about the disconnect between Parliament and the people, saying the partisan system lacks integrity, accountability and transparency. He said with his resignation, he is “free at last.”

I certainly understand how easy it is for an MP to become disillusioned by his own party. It’s like any job. You go into it with certain expectations and somewhere along the line you either don’t like the team you’re with or you bump heads with the boss. In that instance, someone’s got to go. And if you’re not the boss, it’s usually you.

Chipman’s claims about the prime minister should be taken seriously. Critics often lament Minnis’ stubborn nature and he certainly gives the impression that he could care less if someone stays or goes. Perhaps that made Chipman’s decision much easier.

What Impact Can Chipman Have?

I don’t know how effective an independent MP can be in the House of Assembly. Sure, he is free to highlight issues that may otherwise be swept under the rug by party machinery; he is also free to demonstrate against the system, but other than that, going it alone can be tough.

Bringing awareness about a problem is one thing, solving it is another. Constituents expect results. And sitting independents sadly have a much more difficult time getting things done. Not impossible, just difficult.

Independents also find themselves in a much weaker position in the House of Assembly, as debates are typically dominated by those holding higher numbers in the lower chamber. That makes it difficult for a sole party to set the tone or even influence debate.

If they don’t possess the right personality, charisma and bravery to carry them through verbal annihilations, it won’t bode well in the end.

But, being unaligned has its privileges. And that cannot be overstated. For one, Chipman no longer has to pretend that he supports policies that he doesn’t. Not that he ever did. Every vote he makes in the House will be free. In fact, he can step up his criticism of the government and ignore the backlash from parliamentary and former party colleagues.  He is certainly free to have all the political ambition he desires without having to cater to the ego of a party leader.

Earlier this week, Chairman of the FNM’s Centreville Constituency Association, Juan Cartwright said it was “unfortunate” that in this time of national crisis, Chipman had made an “attention-seeking decision” to resign from the FNM.

“This act of egotism is an attempt to take the national focus away from the relief and recovery effort in the northern islands,” he said. “In two years as chairman of the FNM Centreville Constituency Association, I never had a substantive or impactful conversation with Mr. Chipman over the needs of Centreville residents or the business of the association.”

“Since his election, Mr. Chipman has seemed more preoccupied with his political career than the advancement of the people of Centreville.”

Cartwright also claimed that Chipman has made no effort to be a “meaningful party” of the constituency association.

Chipman will have to do some serious overtime to regain the trust of the many Centreville voters who cast their ballots for him in the 2017 General Election. He would be fooling himself to think that Centreville constituents voted for him because they genuinely believed in his message. Many of the votes he received were because voters wanted to rid themselves of the former occupier of that seat.

Now that Chipman is on his own, it remains to be seen what type of MP he will be. We’ll have to wait and see.