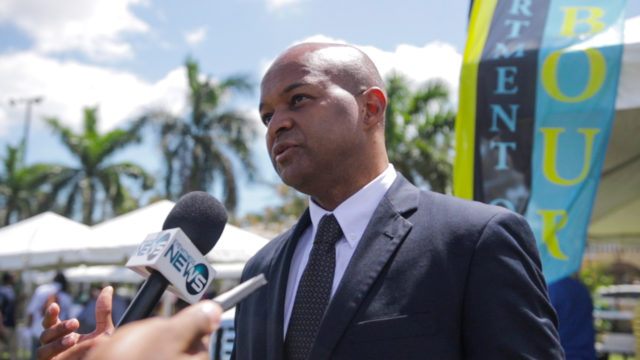 Despite promising to reveal whether he plans to sue Prime Minister Dr Hubert Minnis yesterday, Centerville MP Reece Chipman said he will instead “canvass his constituency” for its views on the potential lawsuit.

In an interview with Eyewitness News, Chipman said, he will have a decision by the time the house reconvenes next Wednesday.

“I am still under advisement at this time after the meeting yesterday (Tuesday), so we are just going to think about it some more,” he said.

“I would like to speak with the community first so I am going to do a full walk about first this weekend. I have an advisory group but I also wanted to walk through the entire community again just before next week. So most likely, whatever it is, I will know what before Parliament opens on the 11th.”

On Tuesday, Chipman clarified that he was not upset with the prime minister for firing him as chairman of the Antiquities Monuments and Museums Corporation (AMMC), but was bothered by the “context of Dr. Minnis’ comments to the press”.

“It’s about the context of the comments, it’s not about the firing,” he said.

“You can fire anyone. You can move them from one place to the next especially in politics that’s an expectation. What is not expected is the comments that came from him – the comments that would have been attached to a question that was asked of him. And then he went on to speak to corruption and weeding out corruption with my name pretty much in the same sentence and then saying that he many never disclose why (I was fired). It leaves so much room.”

Last Monday, Dr. Minnis said he would not tolerate corruption of any kind and that he was led by his “conscience” to terminate Chipman as AMMC chair.

While he did not state emphatically why Chipman was terminated, the prime minister suggested the firing was related to corruption.

“I always say, whatever I do, I put God first and I am lead by the conscience. Once my conscience is clear, I am happy and the FNM made a commitment. We said that we would govern in a certain manner and a certain way,” Dr. Minnis said.

Dr. Minnis also stated on the record that after meeting with Cabinet, he would partially inform the public as to why Chipman was let go.