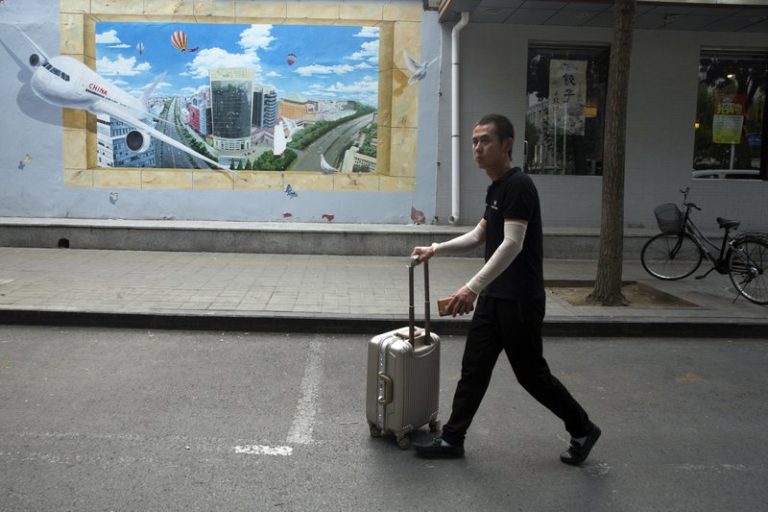 A man pushes a piece of luggage past a mural depicting air travel and a prosperous city in Beijing, China, Tuesday, July 3, 2018. Barring a last-minute breakthrough, the Trump administration on Friday will start imposing tariffs on $34 billion in Chinese imports. And China will promptly strike back with tariffs on an equal amount of U.S. exports. (AP Photo/Ng Han Guan)

BEIJING (AP) — China said Tuesday it’s “fully prepared” for a trade war with the United States as hopes dwindle for a breakthrough in tensions this week between the world’s two biggest economies.

U.S. companies ranging from soybean farms to whiskey distilleries to automakers like Ford and Tesla could suffer if China ramps up retaliatory measures. China’s list is designed to inflict pain on U.S. farmers and other groups that are important to President Donald Trump’s political base.

Lu on Tuesday called the warnings “unfounded speculation and an irrational clampdown” stemming from a Cold War mentality.

“We hope the US will provide a level-playing field for Chinese companies’ investment and operation in the US and do something conducive to the mutual trust,” he said.

China’s stock market has fallen nearly 10 percent in recent weeks on fears of a trade war while its currency has dropped sharply against the U.S. dollar.

In comments Tuesday, central bank governor Yi Gang said the yuan’s 3 percent depreciation over the past two weeks reflects a strengthening of the U.S. dollar and “the effect of external uncertainties.” The yuan, whose exchange rate is tightly controlled, is at its lowest level against the dollar since December.

Despite that, Yi said financial risks were under control.

“The fundamentals of the Chinese economy at present are good,” he said.

“Our country implements a floating exchange system consulting a basket of currencies and based on market supply and demand,” Yi said. “Years of practice have shown this system to be effective and must continue to be adhered to.”

Responding to questions over a safety warning to Chinese citizens traveling to the United States issued by the government late last week, Lu, the foreign ministry spokesman, said the government was merely fulfilling its duty to warn travelers of “potential dangers.”

The warning to Chinese travelers noted the high cost of medical treatment in the U.S., the importance of guarding against crime and terrorist attacks and the considerable powers wielded by Immigration and Customs Enforcement agents.

China accuses Washington of protectionism, pointing to the struggles of Chinese companies like China Mobile and telecoms equipment maker ZTE, which briefly shut down in April after the Department of Commerce temporarily banned it from purchasing U.S. chips.

This article was written by GERRY SHIH, Associated Press writer.