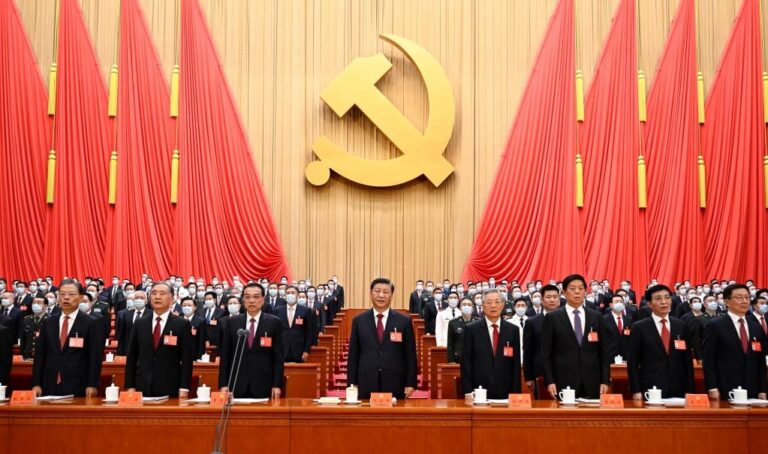 The 20th National Congress of the Communist Party of China (CPC) opened today at the Great Hall of the People in Beijing, capital of China.

The National Congress of the Communist Party of China is held every five years, and the past decade marked three major events of great importance and historical significance for the cause of the Party and the people.

At the opening session on Sunday, Xi delivered a report to the 20th CPC National Congress on behalf of the 19th CPC Central Committee.

Xi said: “We embraced the centenary of the Communist Party of China, we ushered in a new era of socialism with Chinese characteristics, and we eradicated absolute poverty and finished building a moderately prosperous society in all respects, thus completing the First Centenary Goal.”

On the missions and tasks of the CPC on the new journey of the new era, Xi said: “From this day forward, the central task of the CPC will be to lead the Chinese people of all ethnic groups in a concerted effort to realize the Second Centenary Goal of building China into a great modern socialist country in all respects and to advance the rejuvenation of the Chinese nation on all fronts through a Chinese path to modernization.”

The conference will fully summarize China’s major achievements and valuable experience gained in its reform and development endeavors. It will also formulate programs of action and overarching policies to meet China’s new development goals on the journey ahead in the new era and the new expectations of the people. A new CPC Central Committee and a new CPC Central Commission for Discipline Inspection will be elected at the congress. The CPC Constitution will also be amended.

Nearly 2,300 Party delegates from 38 electoral units representing provinces, state-owned enterprises, and central authorities have been elected for the 20th CPC National Congress from a total membership of nearly 96 million people. They represent one in 40,000 members of the Communist Party of China.

The CPC aims to basically realize socialist modernization from 2020 through 2035 and build China into a great modern socialist country that is prosperous, strong, democratic, culturally advanced, harmonious, and beautiful from 2035 through the middle of this century.

Xi pledged to improve the people’s well-being and quality of life, including the system of income distribution.

“This country is its people; the people are the country,” he continued.

“As the CPC has led the people in fighting to establish and develop the People’s Republic, it has really been fighting for their support.

“We will ensure more pay for more work and encourage people to achieve prosperity through hard work. We will promote equality of opportunity, increase the incomes of low-income earners and expand the size of the middle-income group.”

China will also do more to help those in difficulty find employment and meet their basic needs, and improve the social security system with expanded coverage of social insurance programs, he said.

Xi said China has always been committed to its foreign policy goals of upholding world peace and promoting common development.

He said China remains firm in pursuing an independent foreign policy of peace, and stood firmly against all forms of hegemonism and power politics, the Cold War mentality, interference in other countries’ internal affairs, and double standards.

Xi noted that China will never seek hegemony or engage in expansionism, and called upon all countries to hold dear humanity’s shared values of peace, development, fairness, justice, democracy, and freedom, and promote mutual understanding and forge closer bonds with other peoples.

China will implement a comprehensive conservation strategy, boost green and low-carbon industries, and encourage green consumption, Xi said. And China will work actively and prudently toward the goals of reaching peak carbon emissions and carbon neutrality, he said.

“Based on China’s energy and resource endowment, we will advance initiatives to reach peak carbon emissions in a well-planned and phased way in line with the principle of building the new before discarding the old,” Xi said.

He said coal will be used in a cleaner and more efficient way, and the planning and development of a system for new energy sources will be sped up, adding that China will get actively involved in global governance in response to climate change.

The Congress will be concluded on October 22.