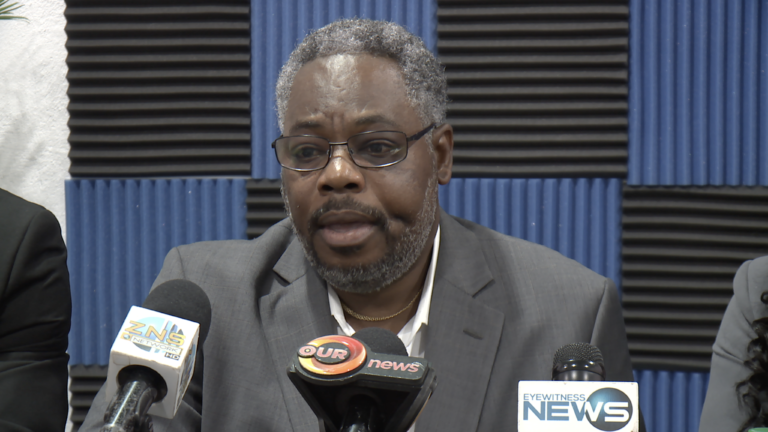 Williams is also being represented by Benjamin Crump, president of the National Civil Rights Trial Lawyers Association of America.

Williams’ alleged attacker was identified as Fawaz Hassan, a 24-year-old employee of Pines Market, who was taken into custody following the alleged incident.

At a press conference held in the capital on Saturday at Incudesk on Chesapeake Road,  Rand told the media that action will also be taken against the owner of Pines Market, which has since closed for business.

Rand said if they receive additional facts that warrant additional charges, they would advocate to have the criminal charges elevated once again.

“Attorney Crump and I recognize and we came here today to be with the Bahamian people, to be in your homes and in your nation, first and foremost to apologize for what happened to Mr. Williams on our soil,” Rand said.

“This never should have happened to Mr. Williams. Senseless violence in America has to stop.”

Rand said they intend to fight for Williams the same way they fought for the rights of others such as Trayvon Martin, adding that they will do everything that they can to ensure that Mr. Williams receives justice in the United States.

Also speaking at Saturday’s press conference, noted attorney Benjamin Crump said he and Rand would ensure that there is a thorough investigation to determine whether the unprovoked stabbing of Williams was inflicted because of the color of his skin.

“It is just a shame that we have to have these questions continually vetted in 2019. We expect and we will demand that Harold Williams, as a  Bahamian citizen, will be given full faith and credit to due process of the law and the administration of justice as if he was an American citizen,” Crump said.

“We would expect no less of an American citizen who was viciously attacked without provocation while visiting The Bahamas, so it should be no different with a Bahamian citizen visiting America. We will expect full justice and nothing less.”

Crump said they want to send the message that ‘black lives matter’.

On Saturday, Williams thanked the Bahamian people for their thoughts and prayers while he was hospitalized.

He noted that what happened to him back in February 2019 could have happened to any Bahamian, and it was unconscionable to think that the owners of an establishment would attack anyone who simply asked to use the bathroom.

Williams said he now has visions of the attack and of his attacker.

He also revealed that his blood pressure has spiked since the incident and he must constantly monitor his pressure.

As for the scar on his face, Williams said, “This scar is not just a scar. It is actually a dent and it has changed the physical structure of my face. Every day I look in the mirror and it is a constant reminder of this 8 to 10-inch knife that could have taken my life,” Williams said.

Williams said had he died from his stab wounds, his two kids would not have a father or a mother as his first wife died 10 years ago.

Meanwhile attorney Crump said they want to make sure that all tourists visiting the United States, regardless of their skin color, know that they will be protected when faced with an injustice.

He said he and attorney Rand will push to ensure that the most severe penalties are levied against Fawaz Hassan in order to send a message.

Williams, a manager at Bahamasair in Grand Bahama, was stabbed in the face by his attacker on Saturday, March 16, 2019, while in Pembroke Pines, Florida.

Williams told 7News Miami shortly following his attack that he was out running errands and needed to use the bathroom. He said he therefore decided to stop at the Pines Market restaurant at 9610 Pines Boulevard.

Williams said while using the bathroom, he felt a “knock” on the side of his face and he initially thought that he had been punched.

“It wasn’t until I looked down and I saw him holding a kitchen knife that was 8 or 10 inches long, and then the blood started gushing everywhere and I realized I was stabbed,” Williams told 7News Miami .

Williams said he had no idea why he was attacked and he was lucky that the knife did not completely pierce his jaw.

On Sunday, Williams’ lawyer Jasmine Rand, who continued to explain how the incident unfolded, said that after her client was stabbed, he was stunned, stumbled backwards and began to slowly retreat out of the restaurant.

“Adding insult to injury, after Mr. Williams had removed himself from the restaurant, the father of Fawaz Hassan walked out the door and threw Mr. Wiliams’ cell phone at him yelling, ‘don’t ever come back.’ Not only did he tell him not to come back but Sheik Hassan never called 911 to report the crime that his son had stabbed Mr. Williams in the face,” Rand alleged.

“All he did was throw his cell phone on the street and refused to render any aid. Thankfully Mr. Williams flagged down a passerby and the passerby directed him to a medical facility across the street where Mr. Williams began a very long journey for his medical recovery.”

Rand said Williams was hospitalized for one week after the incident.

Following Williams’ ordeal, many on social media as well as the opposition referred to the attack as a hate crime. Williams also told Eyewitness News in a recent interview that he ‘personally’ believes that it was a hate crime because he was not robbed.

On Saturday, Rand said they are still investigating whether or not the attack was racially motivated.