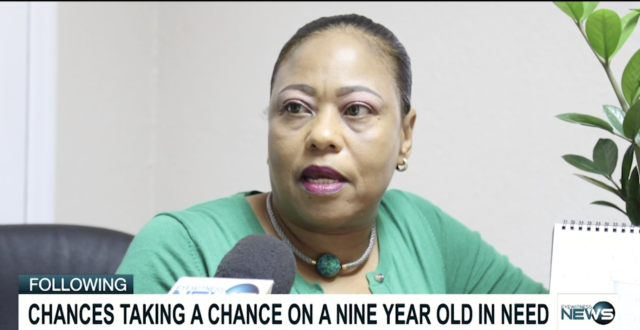 NASSAU, BAHAMAS- Last week, nine-year-old Kamiya Rolle, a student at the Sandilands Primary School fell ill and had to be rushed to the hospital for immediate assistance.

Rolle’s distraught parents were later told that their child had a brain tumor and needed surgery to save her life.

The family, unaware of how they would pay for such an expensive surgery, appeared on the Beyond the Headlines talk show with host Clint Watson, to speak about their ordeal and appeal for help.

Chances Games immediately responded and gave the Rolle family a donation of $10,000.

“We [saw]the story with great interest and we decided to help as best as we could at this time,” said Bernadette Cartwright, Assistant Chief Operating Officer of Chances Games.

Cartwright said they could not ignore someone in such a dire situation.

“I really do hope that what we are doing here will assist greatly with saving her life,” Cartwright said.

And as Kamiyah’s medical bills are expected to exceed more than $100,000, the Rolle’s were appreciative of the donation as they said that their insurance had lapsed.

Charmaine Rolle, the mother of the nine year old said that she could not express her gratitude enough.

“I am so grateful to Chances on taking a chance to help my daughter. We did not have the money to transfer her to the US, and Chances gave us that opportunity,” Rolle said.