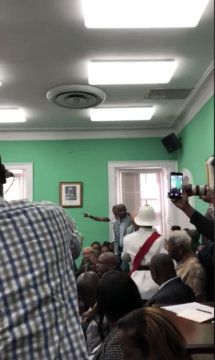 NASSAU, BAHAMAS – Parliamentary proceedings were abruptly suspended ahead of the highly-anticipated budget communication yesterday morning, when Centreville MP Reece Chipman’s sister, Fontella, who was sitting in the gallery of the House of Assembly, made a loud outburst, screaming at parliamentarians, and hurling several elastic bands on the floor in protest.

One of the bands read: ‘#ChipmanStrong’.

Authorities swiftly intervened and escorted the woman outside, but not before she issued condemning statements against the legislators, particularly two Cabinet ministers – Minister of Trade and Industry Brent Symonette and Minister of Tourism Dionisio D’Aguilar.

“This system that you think you have in place will be removed,” she exclaimed.

She was detained at the Central Police Station and later released.

The Chipman family was celebrating the 100th year anniversary of the election to Parliament of their ancestor, H.N Chipman. Fontella wore a white shirt, which also read: ‘#ChipmanStrong’

Outside of Parliament, Reece Chipman told reporters he was surprised by the incident, but shares the views of his sister, and will make no apologies for her actions.

“I make no apologies for what she says because I believe in the same things she believes in, which is justice and righteousness within Parliament and without, and I think at this time, we have a lot of Bahamians [who] are frustrated with the way the system has not given them… a chance,” Chipman said.

“You see, campaigning is one thing. When you come into the House of Assembly you see them playing politics with people within the [House of] Assembly. It’s even worse.

“For me, I can appreciate her position. I make no apologies for what she said because I do agree, and appreciate exactly what she is saying, and sometimes it is very difficult when you are fighting a fight for the Bahamian people or for the people. It is very hard to take those sorts of stands, but thank God we have someone that will do it.
Chipman said the issue was not solely about the Chipmans, but about families in The Bahamas whose birthright have been “stolen” and “their stories re-written”.

When the House returned, Speaker of the House Halson Moultrie said the woman’s actions were “criminally motivated”.

He ordered that she was “never to enter the precincts of this Parliament for the remainder of this session.

“My understanding is that she is now in police custody and so we will let the law enforcement officers and the courts take control on this matter from this point forward,” he said.

Before the adjournment of the sitting, Moultrie readdressed the incident.

Quoting Rule 89 of House proceedings, Moultrie said when incidents on “unparliamentary behavior or disturbance by strangers” occur on the floor of the House, the camera is to remain on the chair to ensure to the offending incident is not broadcasted.

“The rules of the House suggest to the press that such broadcast of such incidents is prohibited and that same rule is repeated again in Rule 90, subsection 4,” he said.

“I made mention of that because I that the incident this morning as a very, very serious breach of the security of the Commonwealth of The Bahamas, and such a breach should not be tolerated, whether it be by strangers or by members.

“At this time, the chair would reserve a decision, other than the decision already made, which was that the offending party is prohibited from entering the precincts of this Parliament for the remainder of this session.”