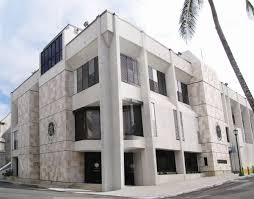 The Central Bank of The Bahamas. (PHOTO COURTESY OF THE CENTRAL BANK)

The Central Bank of The Bahamas’ recently released its latest quarterly statement, which focused on the Service (Real) Sector, which encompasses tertiary intangible goods and services to consumers such as tourism, retail, banking, entertainment and Information Technology (IT) services.

According to the Central Bank’s report, certain indicators such as tourism account for the dynamic economy in The Bahamas.

As the tourism sector continues with the upward trend, provisional indicators of stopover activity, however, suggest that increases in air arrivals translated into higher occupancy levels in the private vacation rental market, specifically from Airbnb businesses.

Information from Airbnb showed a 51.3 per cent increase in overall bookings through Airbnb’s website during the month of May which is relative to the same period last year.

There are a number of Airbnb [available] listings in The Bahamas and Exuma, Abaco, New Providence and Grand Bahama, the four largest markets, have empirically indicated the highest number of bookings which was at 34.3 per cent, the bank’s statement confirmed.

Exuma rose by 68.3 per cent; Abaco rose by 47.6 per cent; New Providence rose by 47.4 per cent and Grand Bahama rose by 42.9 per cent respectively, the quarterly statement claimed.

Similarly, the number of rooms sold advanced by 50.6 per cent for hotel comparable bookings, which include studio and one bedroom entire dwelling rentals; listings for entire homes increased by 52.1 per cent.

In addition, estimates of the average daily room rate (ADR) for The Bahamas market, firmed by 7.7 per cent to $338.40 for entire homes and by 8.0 per cent to $146.57 per night for hotel comparable listings, over the prior year.

Monthly approximations may not coincide with calendar estimates reported in the Central Bank’s quarterly reports.