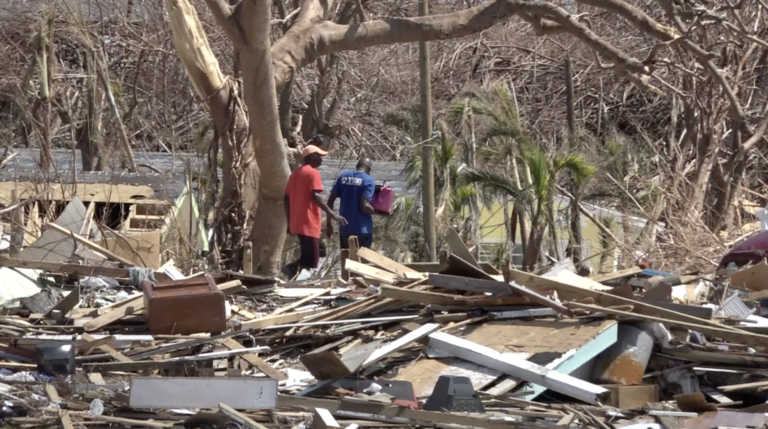 NASSAU, BAHAMAS — As domestic, regional and international agencies partner to address the humanitarian crisis left in Dorian’s wake — a storm that brought over 185 mile-per-winds and up to 23 feet sea surges, which flooded homes — there has been an outpouring of financial pledges from citizens, the private sector and international celebrities.

The record storm pummeled Grand Bahama and Abaco, displacing thousands and claiming the lives of a confirmed 50 people. The final death toll is expected to be “staggering”, according to government officials.

Homes, public infrastructure, government corporations and agencies, businesses and schools were leveled in parts of both islands, creating what some have described as a debris-littered wasteland.

American football quarterback Tom Brady, who noted that his family has travelled to Abaco for many years, said, “We are devastated by the events of this tragic hurricane. While visiting we’ve built relationships with the incredible Bahamians who call these islands home, and now it’s our responsibility to help them. Friends of mine have started The Abaco relief Fund, which will ensure 100 per cent of donations go directly to relief aid.”

Sean ‘Diddy’ Combs offered prayers to The Bahamas and said he will help ‘in the best way possible”.

“The Bahamas is one of the most beautiful places in the world, one of my favorite places to travel to. I will not only pray for those people of The Bahamas, but will also make sure to help in the best possible way.”

American Actor Robert Christopher Riley, who is of Trinidadian and Bajan descent, pledged to donate funds to relief efforts.

Actress Reese Witherspoon, who said her family has spent much of the last six years in The Bahamas, saw the recent devastation and was “beyond words”.

“It will take so much financial support and endless resources to help rebuild homes, schools, hospitals, churches that have been lost,” she said on Instagram. “I know that people who follow me here have huge hearts and I want to ask that you help me pray for these families; these are the organization I have donated to; please help with any support that you can. It would mean the world to these incredible Bahamans people and to me.”

She tagged at World Central Kitchen and the Abaco Relief Fund.

Leonardo DiCaprio called on the world to join him in supporting The Bahamas given the “urgent humanitarian effort needed for disaster relief and recovery”.

“We are saddened by the devastating effects of Hurricane Dorian and are committed to helping with disaster relief and recover,” he said. “The Discovery Land Company Foundations is coordinating humanitarian efforts to help the community of Abaco and has created the Abaco Relief where 100 per cent of donations will go directly to relief aid.”

There have been a host of donations and relief efforts from the private sector.

Royal Caribbean Cruise Lines’ has delivered over 43,000 bottled water and tens of thousands a of meals, as a part of a sustained effort to deliver 20,000 meals per day to Grand Bahama.

The company also donated $1 million to non-profit organization ‘All Hands and Hearts’ to begin an immediate short-term response, and said it will match donations dollar for dollar to assist with rebuilding efforts.

Amazon CEO Jeff Bezos said two Amazon airplanes packed with tens of thousands of Amazon-donated and customer-donate relief items were being sent to The Bahamas to support those impacted by the storm.

Lenny Kravitz has appealed for donations to get the “islands back on their feet”, and encouraged travelers to continue to visit the islands unaffected by Dorian as a means of assisting the country. He said his foundation, the Let Love Rule Foundation will send essential supplies to the islands impacted.

Fox Foundation Founder Adrian Fox committed $500,000, in addition to “doing what we can to assist residents evacuate”.