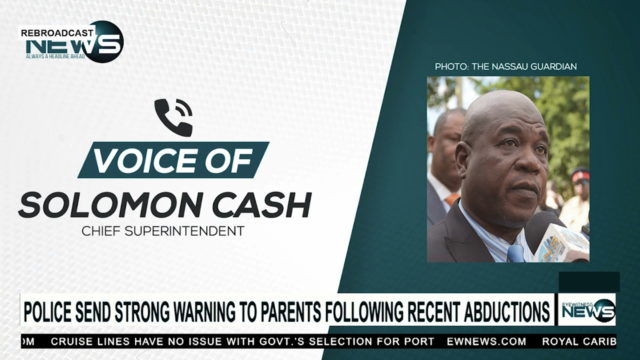 NASSAU, BAHAMAS – On the heels of the latest child abduction case on Saturday, March 30th, head of the Central Detective Unit (CDU) Chief Superintendent Solomon Cash on Monday reassured Bahamians that the Royal Bahamas Police Force (RBPF) is using all of its manpower –  both technical and human –  to investigate the recent abductions in the capital.

Cash said the RBPF is hoping to put an end to the “kidnapping scare” that has gripped the capital, leaving many parents fearful.

“Some of our policing strategies we will not disclose. However, we are stirring up the investigation with additional resources since the last abduction. I can clearly say that our ‘instant room’ is up and running and we have engaged a lot of different strategies,” Cash said.

Yesterday, Cash said that he was unable to address every abduction case, but he said the RBPF is following significant leads.

Meanwhile, the chief superintendent is encouraging members of the public to call into the police hotline and offer any information that they would have on the alleged kidnapper to help speed up the investigation.

Several abductions have been reported in the capital since February.  Thetimeline of abductions are as follows:

SUNDAY, FEBRUARY 17 – Three-year-old Shavard Bain Jr. was allegedly abducted by two women in a silver vehicle while riding his bicycle in the area of South Beach Estates.

He was later dropped off the following day at a laundromat on Joe Farrington Road with no apparent injuries.

SUNDAY, MARCH 3 – police reported that a six-year-old girl had been abducted around 2:00 a.m. that same day after a man had entered a home on Milton Street and abducted the child.

Police said in less than an hour; the child was discovered walking in the area of Woodlawn Gardens by a passerby and she was taken to the Wulff Road Police Station. The child’s mother alleged that she had been sexually molested by her abductor.

WEDNESDAY, MARCH 6 – Police reported that a male child was abducted from a park on Emmanuel Drive off Soldier Road, by a female who was the loan occupant of a grey vehicle. The child was dropped later off at Tonique Williams- Darling Highway near to the entrance of the City Dump.

THURSDAY, MARCH 7 – Police reported that sometime around 4:00 p.m., two boys, ages ten and eight, were walking in the area of Kool Acers when they were picked up by a female driving a dark coloured vehicle, of which she was the lone occupant.

A short time later, the 10-year-old boy was dropped back on Kool Acres and the 8-year-child was dropped off at the Tonique Williams-Darling Highway near to the entrance of the city dump.

SATURDAY, MARCH 30 – Eight-year-old Sanschon Henry was kidnapped while walking home with his brother after playing with friends.

Henry, along with his 10-year-old brother, were standing in front of their residence on Collin Close off Lumumba Lane, when a female driving a silver vehicle stopped and started talking to the boys. The ten-year-old boy reportedly walked away but the woman is said to have lured Henry into her car and sped away.

A short time later, police reported that Henry was dropped off on the Tonique Williams-Darling Highway near the entrance of the City Dump. The boy was reunited with his parents and was taken to hospital where he was said to be in good health.

Here are some anti-kidnapping skills I teach in my Child Abduction Prevention (CAP). They work for adults as well. Please share. These skills could be life-saving. https://pxlme.me/KbM3yPvt