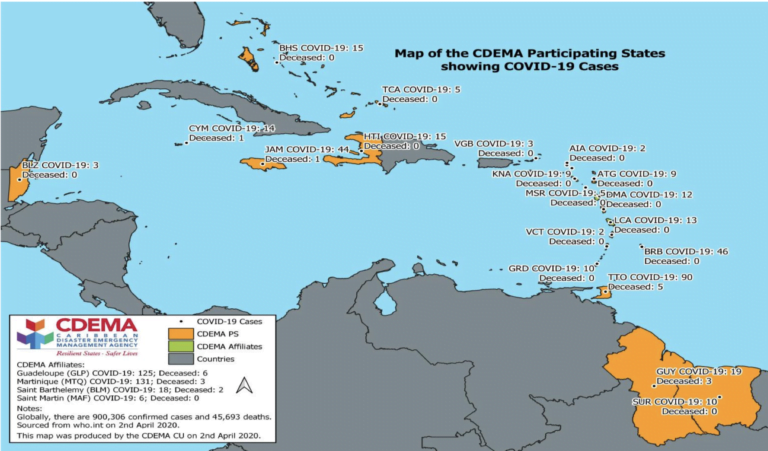 NASSAU, BAHAMAS — Nearly 2,000 cases of COVID-19 have been recorded in the region as of Thursday, according to the Caribbean Disaster Emergency Management Agency.

At least 32 countries in the Caribbean have reported at least one case of COVID-19.

In its outbreak situation report, dated April 2, 2020, the agency said the risk of further importation of cases in the region remains “very high”.

CDEMA underscored the number of COVID-19 cases and steps taken by the majority of its 19-member states amid the pandemic, including The Bahamas.

The data suggests that a handful of countries have yet to implement mandatory shelter-in-place orders as well as full border lockdowns, which could be linked to the agency’s assessment of a continued high risk of exposure to the region.

A 24-hour national curfew, and closure of airports with certain exceptions was ordered on March 24 in The Bahamas.

The order extends to April 8.

As of March 25, there were five confirmed cases of COVID-19 in The Bahamas.

However, over the last 10 days cases climbed to 28, and four patients who have tested positive for the virus have died.

On Friday, The Bahamas implemented a nationwide shutdown of all businesses with the exception of essential services until Monday at 6 am.

Out of the 16 countries CDEMA provided data for in its situation report, the Cayman Islands and Trinidad and Tobago were the only other countries to have recorded COVID-19 deaths.

As of Wednesday, the Cayman Islands had 28 confirmed cases and one death, the report said.

In Trinidad and Tobago, there have been 90 confirmed cases of the virus, and five deaths.

In its report, CDEMA said the aim for all countries remains to stop the transmission and prevent the spread of the potentially deadly virus.

CDEMA encouraged countries to strengthen their healthcare sector response and move to a “state of readiness and rapid response”.

Antigua and Barbuda — nine confirmed cases as of April 2. A Twenty-four curfew until April 9 and border lockdown remains in place. Cuban medical teams are assisting the country. (Population: 96,286)

Bahamas — There have been 24 confirmed cases and three COVID-19 deaths. Border lockdown and 24-hour curfew remains in place until April 8. Officials have said country is experiencing a “surge”. (Population: 385,640)

Barbados — Forty-six confirmed cases as of April 2. A nightly curfew in place since March 28, was expanded to a 24-hour curfew today. The sale of alcohol has been banned. Borders; however, remain open, though all visitors from United States and United Kingdom will be quarantined for 14 days. (Population: 286,641)

Cayman Islands — Twenty-eight confirmed cases and one death as of April 2. A total of 265 people have been tested. (Population: 64,174)

Dominica — A total of 12 cases confirmed with no reported deaths. The airport as closed on March 26. (Population: 71,625)

Grenada — Ten cases confirmed as of April 1. A “limited” state of emergency was declared on March 25. As of Wednesday, drone surveillance was used to ensure adherence to the curfew. An alcohol sale ban is in place. (Population: 111,454)

Guyana — Nineteen confirmed cases on the island with 36 people in quarantine. Information on emergency protocols, if any, where not provided. (Population: 779,004)

Montserrat — Five confirmed cases as of Wednesday. A 24-hour curfew was imposed on March 28. A team of 32 healthcare professionals from Cuba expected to arrive to provide assistance. (Population: 4,992)

St. Kitts and Nevis — With a population of just over 53,000, there have been nine cases of the virus as of April 2. A total of 102 people have been tested. Airports and ports were closed on March 25, and non-essential services and schools remain closed. (Population 52,441)

Trinidad and Tobago — There have been 90 confirmed cases of the virus as of Wednesday and five deaths. A total of 595 people have been tested. A 24-hour curfew was implemented on March 29. All public transportation has been reduced by 50 percent. In response to compliance issues related to social gathering, the government reduced the number of people allowed to gather to five. GIS mapping shows hotspot in norther portion of the island. (Population: 1,389,858)

Turks and Caicos — Five confirmed cases and nine suspected cases. A total of 289 people remain in quarantine or self-isolation, while 80 have been released. A 24-hour curfew implemented on March 28 remains in place until April 14. (Population: 37,665)

British Virgin Islands — Three confirmed cases of the virus, with nine still under investigation. A total of 52 people have been tested. Supermarkets opened between 8 am and 9 pm from April 2 to April 4. Today, only people with surnames beginning from ‘J’ through to ‘R’ were allowed to access essential services. People with surnames beginning with ‘A’ through ‘I’ were allowed to shop for groceries today. (Population: 29,802)

Population sizes for this article were sourced from The World Bank’s database.