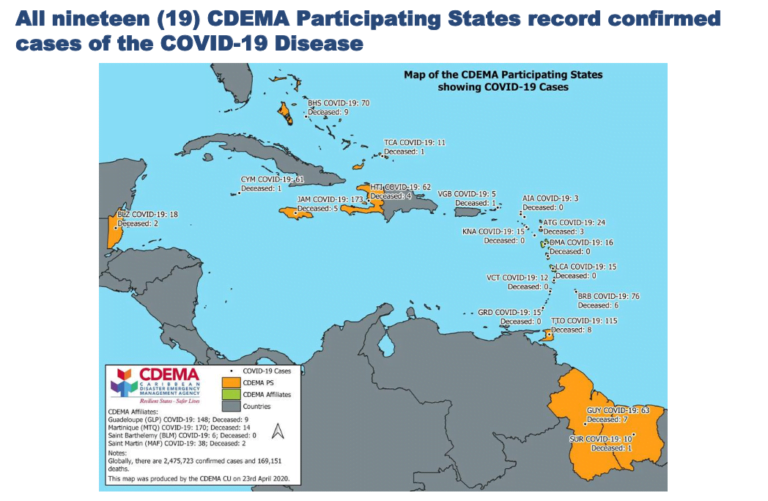 More than 800 people in The Bahamas tested

NASSAU, BAHAMAS — There have been nearly 8,500 coronavirus cases and 444 related deaths spread throughout 33 countries in the region, according to the the Caribbean Public Health Agency (CARPHA) latest situation report.

The numbers were reflected in a report by the Caribbean Disaster Emergency Management Agency’s (CDEMA) tracking of the status and mitigation of outbreaks in its 19 participating states – all of which have reported the importation of at least one confirmed case of COVID-19.

The Bahamas has advised CDEMA that some 853 people have been tested thus far.

Health Officials have began expanded testing on New Providence and Grand Bahama, as well as across a number of Family Islands, including Bimini, North and South Eleuthera, Exuma, Harbour Island.

It is expected that as more tests are conducted, the number of cases will rise.

Coordinator of the country’s COVID-19 response Dr. Merceline Dahl-Regis said it is hoped The Bahamas will peak within a week, though this heavily depends on how well the public follows social distancing guidelines and other measures.

A state of emergency was declared in early March and later extended to April 30, in efforts to slow the spread of the virus.

The country’s borders have been closed and a nationwide curfew and lockdown has been implemented.

“The aim for all countries now, is to stop transmission, prevent the spread of the virus and save lives,” the organization underscored.

Always a headline ahead, around the world, Bahamas