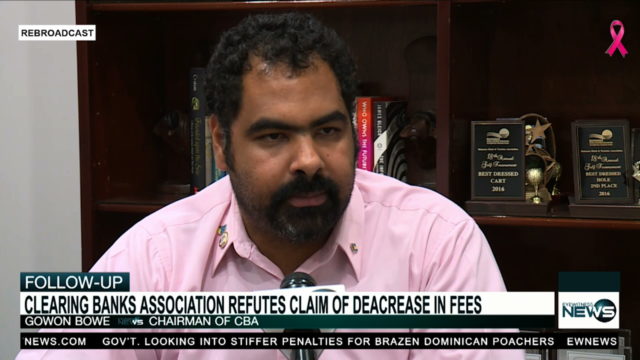 Last month before a weekly Cabinet meeting, Foulkes revealed that he had recently met with the Clearing Banks Association and an agreement had been formalized  [to lower administrative fees] after months of public pressure from consumers over the increased cost of banking.

“I’m very pleased to announce that some of the banks have lowered their administrative fees for the various services,” Foulkes claimed at the time.

“In fact, some banks have already lowered their fees. I spoke to all six of the clearing banks and that is what we agreed to.”

Bowe, however, told Eyewitness News on Thursday that while the CBA did meet with Foulkes and Union leaders, there was no agreement made to lower fees.

“To be honest, the minister was exuberant in his initial comments,” Bowe said.

“Ultimately what the banks have said all along is really an understanding of what those fees represent.

“What we agreed on with the minister and the government is that it is not about reducing fees.”

Bowe explained that if commercial banks took that approach [of reducing fees] it would imply that irregular activity was taking place.

“If we did that it suggests that fees were inappropriate and  that there was some gouging going on when in reality there was just a shift in the subsidized rate from  zero to  fees being charged for a fee structure.”

Chester Cooper, the Progressive Liberal Party’s Shadow Minister of Minister of Finance also weighed in on this issue and noted that the present fee structure is “out of control.”

He recently called for Parliament to appoint a select committee to examine banking practices in the country.