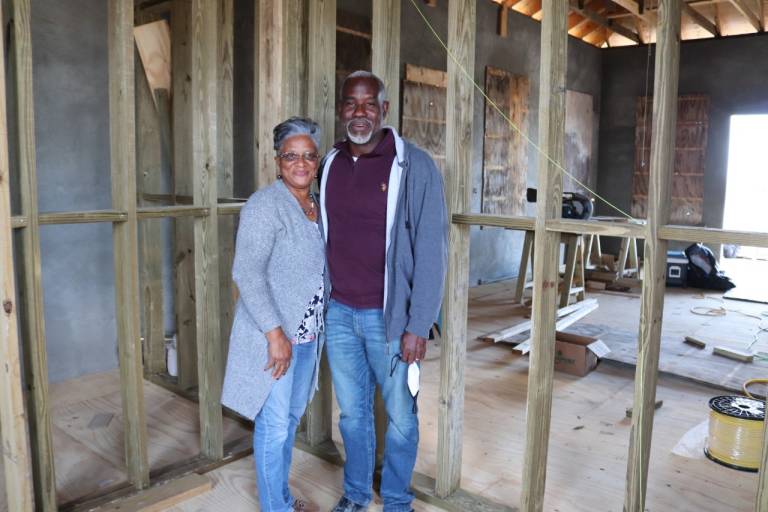 Terrance and Shoine Strachan said they plan on using the money received from the Red Cross to help repair their Abaco home, which was destroyed during Hurricane Dorian in September 2019. (PHOTO: THE RED CROSS)

ABACO, BAHAMAS — When Hurricane Dorian slammed into the shores of the Bahamian islands in 2019, it took many things away from people who lived there. It destroyed houses, businesses and material things but even more tragically, it stole memories, the feeling of security and loved ones.

It can be difficult to figure out exactly what the first steps are to take after a storm like Dorian rips your life apart, and even more difficult to actually take those steps forward. To relieve some of the burden after a storm of such magnitude, the American Red Cross and Bahamas Red Cross distributed more than $11 million in cash to more than 3,000 families affected by Dorian in the weeks following the storm, empowering them to use the funds for what was most important to them.

More than a year after Hurricane Dorian struck, the Red Cross reached further to extend the cash program to additional families still recovering from Hurricane Dorian who were not served in the initial payments. By giving assistance in the form of cash, people are empowered to make their own decisions and decide for themselves what is best for their families. The cash was also unrestricted, meaning people were free to spend it however they wanted without limitations to certain shops or items.

In total, over $13 million was distributed to nearly 4,000 families impacted by Hurricane Dorian thanks to the generous donations of Bahamian locals, corporate groups and the American public. Each family received a gift of over $3,600 that they never have to pay back.

The Red Cross used a digital wallet platform to get the money directly into the hands of families. Using the digital wallet made it even easier to distribute the cash to people with or without a smartphone and not using physical debit cards.

Dorothy Duvra lost all her belongings and her Abaco home during Hurricane Dorian and could no longer live there. She relocated to Nassau with her family until she has the means to go back. She says receiving money from the Red Cross has helped her in the complicated process of getting back to Abaco, something she hopes to do soon.

“We were able to save the clothes that was on our back and our personal identification and stuff and that was about it; we lost everything,” Duvra said. “So, the cash came in handy…and it goes a long way, so I really appreciate the Bahamas Red Cross for that help.”

Euturpy McIntosh grew up on Green Turtle Cay but is now living in Nassau with her daughter after Dorian destroyed her home and the homes of her family members. She used the money on rent, medications and food and was able to put some of it toward rebuilding a home on Green Turtle Cay. She said the ease of the digital wallet platform made the whole process simple and dignified.

“It was no problem. They texted me, I went there and they gave me no hassle. She said ‘give me your ID’ and that was it. It was amazing,” she said as she marveled at the use of technology to put the money in her hands.

Local Pastor Terrance Strachan and his wife, Shoine, of Red Bay, Abaco, narrowly survived Hurricane Dorian as their house literally came crashing down around them. They were left with nothing but some soggy clothes and a pile of rubble where their home used to be. With no insurance, they faced a long, challenging path to get back into a home. But a call from the Red Cross informed them they were eligible to receive the cash gift of $3,600 through the digital wallet. They said that money was the bridge to materials they needed to keep rebuilding their house and helped keep them focused on moving forward and not wallowing in the sad thoughts of the past.

Thanks to the incredible generosity of the American public, the Red Cross has been able to directly support the people whose lives were most deeply disrupted by Dorian. Nearly two years later, the American Red Cross has never stopped working in The Bahamas. Donations to the Red Cross have allowed it to put cash right back into the hands of local residents so they could choose exactly what they needed for themselves. The American Red Cross gave out emergency supplies, food and clean water to thousands of families and is helping with long-term recovery by providing cash grants to repair homes and businesses. Together with partners, the Red Cross is helping to be the bridge to comfort and hope following a life-changing disaster.