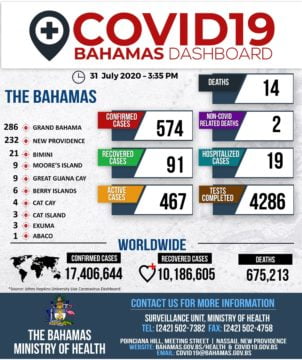 NASSAU, BAHAMAS — Health officials confirmed 66 new cases of coronavirus yesterday, taking the number of cases in the country to have 574.

There are 467 active cases in the country.

Officials indicated that since the opening of the country, 4,246 Bahamians traveled to international destinations – the majority of which were COVID-19 hotspots.

To date, there are 286 confirmed cases of COVID-19 in Grand Bahama, 232 in New Providence, 21 in Bimini, nine in Moore’s Island, nine in Great Guana Cay, six in the Berry Islands, four in Cat Cay, three in Cat Island, three ( in Exuma, and one on Abaco.

Dr Frank Bartlett, head of Grand Bahama’s COVID-19 task force, confirmed that the deaths have been within the past month.

Bartlett advised 189 people are in quarantine on the island.

He said health officials are following 764 contacts, of which 160 are travel-related.

Bartlett furthered 801 swabs have been completed and more are being sent out today.

There are six people at the isolation center and six people are in hospital under investigation, he said.

While officials have completed some 4,286 tests to date, Chief Medical Officer Dr. Pearl McMillian explained yesterday that there is currently a backlog in the processing of cases.

McMillian noted that prior to the significant rise in cases the country was having one of the best turn around times of receipt of the real-time RT -PCR testing from the national reference lab.

“Until recently we would have been getting our results within 24-hours, sometimes a little over that,” she said,

“But most recently with the increasing number of cases and the enhanced contact tracing and the samples associated with that, we did run into a situation where we had some backlog with tests being run within 48-72 hours.

“That is not what we are used to and certainly we are in the process of enhancing our capacities in the national reference lab to ensure we address that backlog and get back to the 24-hour turn around for results.”

McMillian said health officials anticipate that over the next few days, they will be in a better position.

Officials also expressed concerns with individuals being asked to quarantine and not being honest with health professionals.

Minister of Health Renward Wells encouraged Bahamians to follow protocols and ensure they are adhering to the advice of professionals when being asked to quarantine or isolate themselves.

Why is it that we are not locking down the over 50’s ? Since they are the ones most likely to die from the virus. The rest have proven to overcome the illness in a few days.