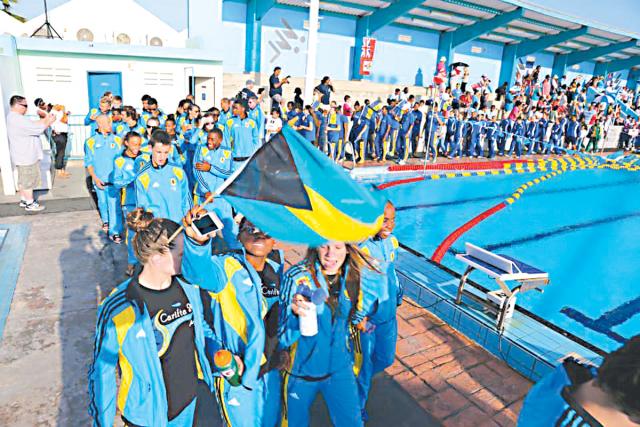 Team Bahamas at the 2016 CARIFTA Games. (PHOTO: THE NASSAU GUARDIAN)

The Bahamas Aquatic Federation (BAF) yesterday named the 36-member team that will represent the country this month at the CARIFTA Swimming Championships in Kingston, Jamaica.

Three teams were also named for the CARIFTA Water Polo Championships, which will take place at the same location two weeks before.

This year’s team will be led by CARIFTA standouts Lilly Higgs and Izaak Bastian, along with Devante Carey, Katherine Slatter and Zayle Elizabeth Thompson.

The Bahamas regained the CARIFTA swimming title last year at home, after falling to Martinique the year prior.

BAF President Algernon Cargill told Eyewitness News Sports that he is confident this year’s team will hold on to the title.

“It’s a very strong team that will be led by Lilly Higgs and Izaak Bastian. They are the two outstanding swimmers on the team,” Cargill said.

“Lilly, obviously had a great meet at CARIFTA last year and she’s heading to the University of North Carolina next year.

“In the boy’s division, Izaak Bastian is expected to shoulder a lot of the weight for us. In fact, the entire senior boy’s division is very strong. This team is comprised of all qualifiers. We are looking forward to going to Jamaica and successfully defending our title.”