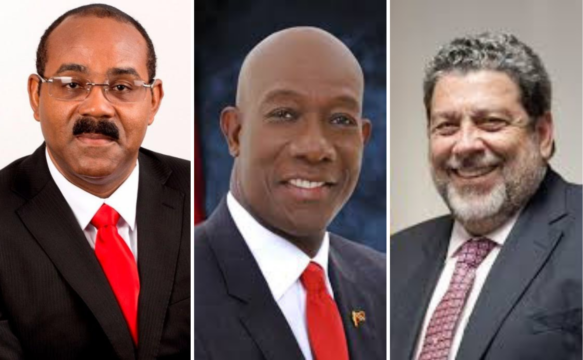 NASSAU, BAHAMAS – A split created among CARICOM member states in January when a handful of Caribbean countries, including The Bahamas generally supported the United States’ call for an end to embattled president Nicolas Maduro’s rule, has been widened by a recent multi-lateral meeting between the leaders of those supporting countries and U.S. President Donald Trump.

According to Minnis, those talks centered around trade, border security, drug trafficking and Venezuela, among other issues affecting the countries of the region.

According to the White House, a high-level delegation from the Overseas Private Investment Corporation, the U.S. development lender, will visit the five countries within 90 days.

Over the weekend, several prime ministers, including Saint Vincent and the Grenadines Prime Minister Ralph Gonsalves criticized the talks and the implications of the leaders in attendance speaking on behalf of the region without CARICOM representation, namely the CARICOM advisory committee.

­­­­“None of those persons were invited and for it to be a true CARICOM representation you must at least have the chairman so that any discussion of Venezuela in that context . . . it cuts across the agreement mechanisms that we have put in place,” Gonsalves said on Saturday, while referring to the U.S. actions relating to Venezuela as a “a creeping coup d’état” against a legitimate government”.

He said, “We in CARICOM have to be very alive to the mischief that some persons may be up to, to seek to divide us in a manner which we ought not to be divided and therefore reduce the extent of our work.”

Ahead of Friday’s meeting, Trinidad and Tobago Prime Minister Dr. Keith Rowley said despite not being invited to the meeting, the country has never stood taller or prouder.

He also pointed out that CARICOM is comprised of 15 countries, and not the handful of countries that were represented at a meeting with the U.S. president.

In a Facebook post, Browne said of the meeting, “I feel embarrassed for those weak-minded leaders, who allowed themselves to be used by carrying out the agenda of others”.

He insisted the CARICOM must not become the “plaything of others”, and asserted that there are those who are “determined to undermine CARICOM’s solidarity and to relegate the region to an object of history”.

All five countries were among the 19 which voted for an Organization of American States resolution in January to not recognize Nicolas Maduro as president — breaking away from other CARICOM members.

Guaido declared he had a constitutional right to be president as head of the opposition-controlled National Assembly in January.

The economic collapse that Venezuela has been faced with has created a humanitarian crisis and forced millions to leave the country.

In January, a contingent of regional leaders led by Harris, met with United Nations Secretary General Antonio Guterres to discuss a way forward that would bring about stability in Venezuela.

Last month, during CARICOM’s inter-sessional summit in St. Kitts and Nevis, the body reaffirmed its position of non-interference in the affairs of Venezuela, noting instead that it was prepared to mediate to facilitate a peaceful resolution.

During a press conference Saturday following his return from Florida, Minnis told the media he organized a meeting with the other heads of the state the day before meeting with Trump.

He said during that meeting, it was discussed and agreed which issues affecting the region would be addressed with the U.S. president.

The prime minister maintained that The Bahamas “position is firm with Venezuela”.

Following the talks in Florida, Jamaican Prime Minister Andrew Holness said the message from the meeting was that the U.S. desires to “encourage and promote a stronger relationship with the region”.

“We’re very happy with that message,” he said.

“We feel that it’s a message that it long in coming.

“We’re satisfied that there will be instrumental action with that message.”

Saint Lucia Prime Minister Allen Chastanet, the incoming chairman of CARICOM, also welcomed the level of engagement with the region, and said it marked the beginning of a “much broader initiative by America to the Caribbean”.

“This meeting was really about President Trump’s vision to re-initiate dialogue with the Caribbean,” he said.

Last month, Minister of Foreign Affairs Darren Henfield dismissed that The Bahamas’’ decision to support Guaido was influenced by foreign pressure, the minister shot down the suggestion.

He said, “The Bahamas is a sovereign nation, which acts in the interest of the Bahamian people, and that’s as much as I’ll say on that”.

Meanwhile, The Progressive Liberal Party (PLP) has said it stands with the CARICOM consensus.

In a statement, PLP Chairman Fred Mitchell said, “Having examined the outturn reports of the recent meeting in West Palm Beach, we are concerned that there was no new ground which was of any immediate benefit to The Bahamas.

“The prime minister’s combative and evasive answers to the press upon his return did not inspire confidence that there was any substantive benefit to The Bahamas.

“Our country should always stand on the foundations upon which our state was created and chief amongst there is the non-interference in the affairs of another state.”