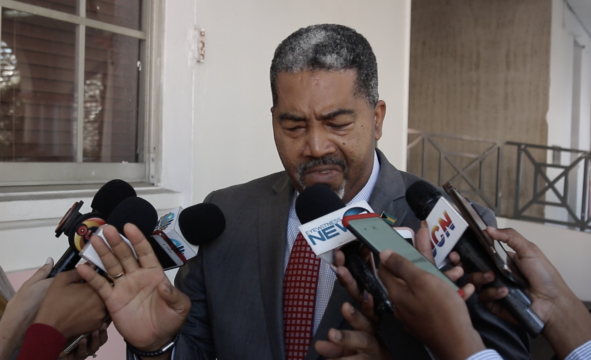 NASSAU, BAHAMAS – A day after he admonished the media not to ask him about rapes in The Bahamas and suggested the issue was not his ministry’s “business”, Minister of Social Services and Urban Development Frankie Campbell yesterday apologized.

In a statement, the minister said he was trying to “avoid what appeared to be encroaching on another minister’s portfolio”.

“I am humbled at the opportunity to speak to mothers, fathers, women and girls; victims of rape, abuse and violence, and anyone else who may have been offended by a video recording of me that is in circulation,” Campbell said.

“I apologize for what seemed to be insensitive as I responded to media personnel.

“I was merely trying to avoid what appeared to be encroaching on another minister’s portfolio.

“I am fully aware of the duties and core functions of the Ministry of Social Services and Urban Development, which includes, but is not limited to, food assistance, shelter for all victims, including rape victims and victims of trafficking in persons, school and uniform assistance, the elderly, child protection, rehabilitation and person with disabilities.”

Outside the Churchill Building Tuesday, Campbell was asked about the six per cent increase in rape cases in 2018 compared to 2017.

He shook his head and pushed the microphones and other recording devices of reporters away with both hands.

“Someone told me earlier this year [that] there are 12 months in the year,” said the minister, who continued to push away reporters’ recording devices even as he spoke.

“Spend the first six months minding by business; the next six months staying out of other people’s business and I’d be fine.

“Don’t ask me about rapes. Try to keep me out of other people’s lanes.

Pressed on whether he believes his ministry has a role to play in addressing the issue, the minister responded, “You are talking about crime.

“You can see I am trying to avoid that. I don’t avoid talking to you, but I want to stay in my lane.”

Yesterday, Campbell said while the incident has caused the public to question his familiarity with the 2015 strategic plan to address gender-based violence, he has, in the last six months, partnered with the Bahamas Crisis Centre, the Caribbean Men’s Group, the Zonta Club, the United Nations Women and other non-governmental organizations in an effort to bring this “very strategic plan to fruition”.

“I am committed along with the ministry and its dedicated staff and all of our NGO partners, to honour, advance and promote all of the convention to which The Bahamas is a signatory,” he said.

“In pursuit of the commitment articulated during the 2017 Speech from the Throne, the government has indicated a zero tolerance against all rapes and violence,” the minister said.

“Efforts to prevent violence against women require determining and addressing violence at its root.

“The Ministry of Social Services and Urban Development, through its many departments does precisely this, through the provision of counselling and crisis intervention and prevention services.

“As a husband and the father of one son and three beautiful girls for whom I want nothing but the best, as I do for all girls and women of our Bahamaland, this more than just a job.

“As I would have indicated while representing you at the Committee for the Elimination of all form of Discrimination Against Women and Girls (known as CEDAW), I give you my assurance that I remain committed to all of its articles not merely for the purpose of reporting internationally, but for the benefit, upliftment and improvement of our very own.”

According to statistics released by the Royal Bahamas Police Force this month, rapes increased from 52 cases in 2017 to 55 cases in 2018.