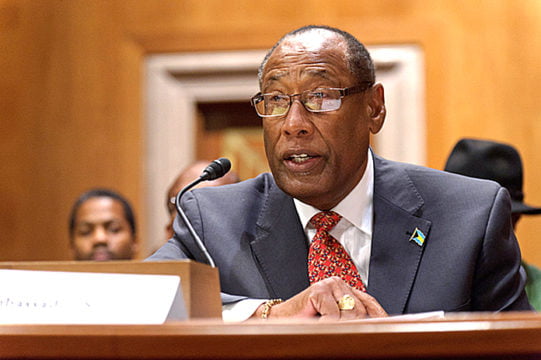 NASSAU, BAHAMAS – The Cabinet Office announced on Monday that the Honourable Cornelius A. Smith will be appointed as the 10thBahamian Governor General of The Bahamas, effective June 28, 2019.

The Cabinet Office statement confirmed a premature announcement that was made by Smith at a farewell luncheon with Foreign Affairs staff in Freeport, Grand Bahama on May 31.

Smith was not aware that his announcement was being recorded, which later went viral.

His announcement also garnered strong criticism from the official Opposition Progressive Liberal Party, its leader, Philip Brave Davis expressing that Smith’s announcement was not only a violation of all protocols, but was insulting to the present holder of the office, Dame Marguerite Pindling.

Smith, who said that the announcement was made in the “strictest of confidence,” later extended his sincerest apologies to Governor General Her Excellency Dame Marguerite Pindling as well as to Prime Minister Dr. Hubert Minnis and the Government for any embarrassment or inconvenience resulting from his unintended breach of protocol.

Meanwhile, the Cabinet statement released on Monday said Mr. Smith is a committed civic-minded individual who has, for more than half a century, provided leadership to the Bahamian community and social and civic organizations, including the Chamber of Commerce and the Kiwanis and Rotary organizations.

“A community and political activist from the seventies (1970s), he is a founding member of the governing political party,” the Cabinet Office statement outlined.

Her Excellency, the Governor General of the Commonwealth of The Bahamas, the Most Honourable Dame Marguerite Pindling, who has served in this role since July 8, 2014, will demit office on June 28th, the Cabinet Office said.