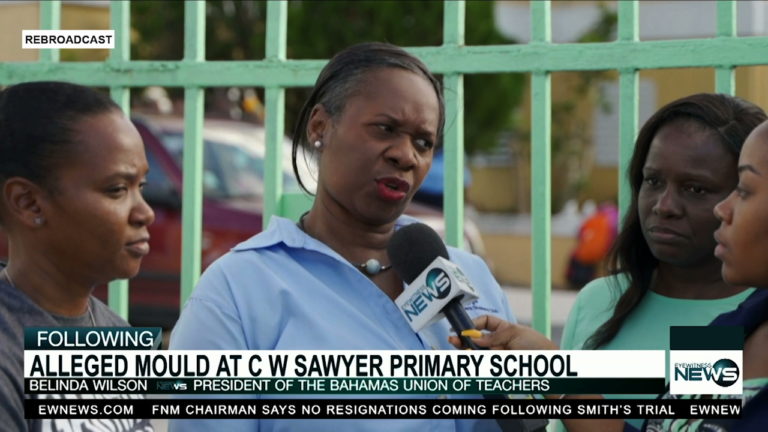 NASSAU, BAHAMAS – Bahamas Union of Teachers (BUT) president Belinda Wilson on Tuesday alleged that the C.W. Sawyer Primary School was deemed unfit and condemned some ten years ago.  Despite this, Wilson alleged that the Ministry of Education kept the school open and teachers are now complaining of mould in several classrooms.

“We are really concerned too about the physical structure, and we understand that there is a summary report [of the school], so we have asked for a full report from engineers who can tell us whether the school is sound now,” Wilson said.

The BUT president said the school’s assistant vice principal met with teachers on Tuesday to address the mould problem as well as other pressing concerns.

“I was able to contact Mr. Ryan from the Department of Environmental Health who informed that tomorrow [today] they will be able to do the mould testing and [will] also be able to look at some of the other unsanitary conditions here,” she said.

Wilson said there are a number of teachers that have expressed their concerns, so they will ensure that if the mould levels are high those classrooms will be shut down.

The union president said that to her knowledge, The Ministry of Education and Environmental Health has teamed up to assess other schools and prevent future situations.

On Monday, Darville released a statement which alleged that faculty and staff at the school had reported that mould had taken over the institution.

Darville claimed that teachers were suffering from respiratory complications as a result of mould exposure, forcing some of them to take a leave of absence.

According to Darville, these concerns were officially reported to the school’s principal and district superintendent, however, there has been no corrective action to remediate the school’s crisis.

Meanwhile, the mould reports at C.W. Sawyer comes on the heels of reports that continuously surfaced at the government’s C.H. Reeves Junior High School for most of the fall term.

Teachers at C.H. sat out on several occasions and BUT engaged in a continuous back and forth with Ministry of Education officials.

It was not until the beginning of the spring term in January that the mould problem at C.H. Reeves was rectified.