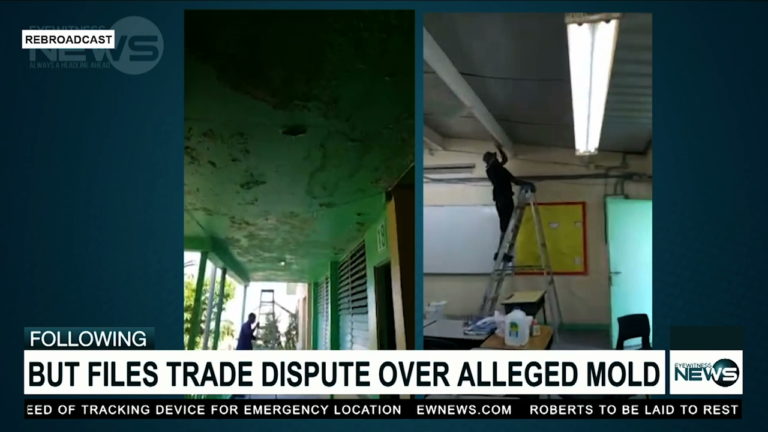 Teachers at the C H Reeves have reached their breaking point, after nearly two weeks of refusing to teach due to reported mold infestation and other hazardous conditions in 19 classrooms at the junior high school.

On Wednesday, Bahamas Union of Teachers  (BUT) acting president Joan Knowles-Turnquest said enough is enough and until a proper testing of the mold is done, teachers will not return to the classroom and continue to risk their health. The union has filed a trade dispute with the Department of Labor.

“We also have two teachers who had miscarriages, teachers who were in those classrooms, who have students who are ill, the teachers are only asking for a testing to be done.

In the House of Assembly on Wednesday, Education Minister Jeffery Lloyd said acting on the concerns of the teachers, his ministry engaged the services of a contractor who cleaned the mold and removed the mildew.

“We requested the assistance of Mr. Anthony Ryan of the Environmental Monitoring Risk Assessment Division at the Department of Environmental Health. He made an assessment of the affected classrooms and found what he described to be ‘recognized environmental concerns’ and subsequently formulated a prescription to rectify those issues,” he said.

“Acting immediately upon the recommendation given by Mr. Ryan, the Ministry of Education engaged the services of a contractor who conducted the remediation process. This included the removal of mildew, the cleaning of dust on ceiling beams, and the cleaning of air-conditioning units. Other contractors affected repairs to a leaky roof and to faulty toilets in one of the female students’ bathrooms. The school has been deemed safe and teachers can return to the classroom.”

However, Knowles Turnquest said hours after the so-called cleaning, the mold was back.

“What they did was, they said there was dirt in the ceiling and vents and they cleaned those with bleach and water and they scrapped off the mold that was growing on the wall,” she said.

“But when we went back yesterday, they were growing right back. Something is wrong.”

But that’s not the only issue, according to the BUT acting president.

“The students’ restrooms are deplorable, there is water and sewerage seeping up under the tiles, the termite and rat infestation is bad. The rats all have names now, that’s how frequently they are there when we are having class time they are enjoying the lessons a much as the students are.”

Teachers were given a show cause letter from the MOE demanding them to not only return to the classroom, but also explain in writing within 14 days why the disciplinary action should not be taken against them for failure to carry out their duties.