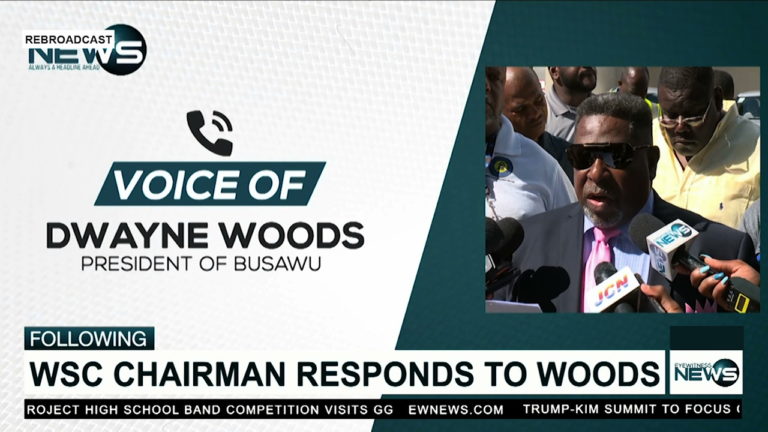 NASSAU, BAHAMAS – President of The Bahamas Utility Services and Allied Workers Union (BUSAWU) Dwayne Woods said he is prepared to take legal action against the Water & Sewerage Corporation (WSC) after the corporation’s executive chairman revealed his salary to the media on Sunday.

“Let me make it abundantly clear that all of the numbers as it relates to my salary that Adrian Gibson would have put in the press is disingenuous and erroneous,” Woods told Eyewitness News Online.

“They are false and it appears as though Mr. Gibson is trying to get me killed by putting those type of figures on my head to say that is what make.

“I thought that my salary would have been confidential information, and I don’t know why the chairman would be in the press disclosing a worker’s salary. Something is wrong with that picture.”

At a press conference on Sunday, WSC chairman Adrian Gibson told the media that Woods has been on administrative leave for years, but was still collecting a salary of $60,000 in addition to other perks as union president.

His comments came after Woods had expressed that the union was considering a strike vote, in an effort to have their many concerns addressed.

The union’s main concern was the reported denial of free usage of office space for union meetings; the refusal to grant administrative leave to the union president; and forcing employees to take accrued vacation leave.

Woods said he plans to visit a lawyer today to determine how best to seek legal action based on what was stated by Gibson as it relates to his salary.

The union president also maintained that all of the figures put forth by Gibson are incorrect. “All of the figures are wrong and I don’t want to get personal and attack anybody but the most I can say is that is not my salary.”

“So if you put it all together I make about $72,000 a year and that is trivial and small money for a union president. My duties as union president and the weight lifting is heavier than being an employee at the Corporation,” Woods said.

The union chief also addressed the claim made by Gibson that he has not worked for years but was still collecting a salary.

According to Woods, he was sick for a ‘period of time’ and he is presently on vacation.

He explained that under the union’s industrial agreement, there is a three-year benefit that speaks to union leave which is allocated to an employee elected to a permanent union office.

And Woods said for the past seven years he has been enjoying this benefit.

“My predecessor…enjoyed the same benefits for six years before me, which puts the leave to about 13 years for both presidents,” Woods said.

The BUSAWU president, who referred to the WSC chairman as a “politician”, said that Gibson’s press conference on Sunday was a “spin doctor” move as he made reference to his lengthy administrative leave as if it was an issue, even though it is a benefit outlined in the union’s industrial agreement.

“There is only one way that this benefit can be removed, and that is by mutual agreement. So what he does is he makes it personal and tries to spin it like I don’t want to go to work when in fact I am entitled to the leave,” Woods said.

As it now stands, the union has filed an action in the Supreme Court action as it relates to Woods’ administrative leave and the union has also taken their concerns to the Labour Board.

According to Woods, the Labour Board has also advised the Corporation that they cannot discriminate when it comes to administrative leave, but his advice has fallen on deaf ears.

“It is a pity that some people have to stoop so low to try to humiliate people but I am not getting personal.”

Meanwhile, the WSC Chairman told the media Sunday that administrative leave has been requested annually of consecutive Boards by the union president and it is entirely discretionary.

The Board, Gibson said, can either cancel it or renew it.

Gibson said the existing Board, upon review of the realities on the ground determined not to renew the administrative leave with pay.

He said Woods was informed of the decision and was told to report for duty.