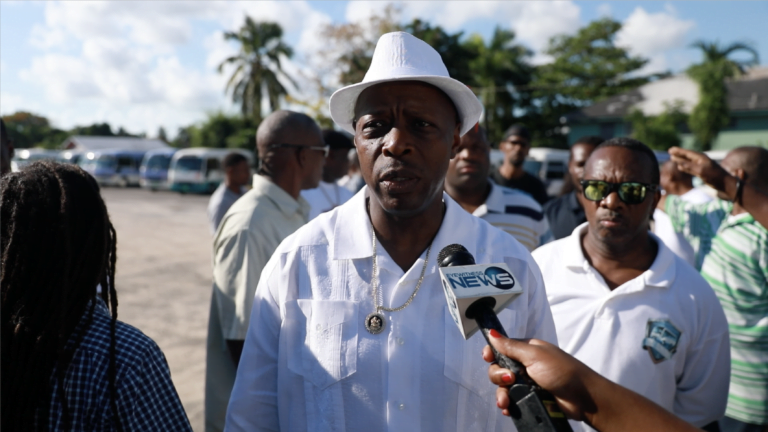 NASSAU, BAHAMAS – Members of the Bahamas Unified Bus Drivers Union on Wednesday demonstrated by withdrawing their services, in an attempt to gain the attention of Minister of Transport Renward Wells.

A significant amount of bus drivers along with union members gathered at the old City Markets Building on Market Street to lead a demonstration, after their concerns have continuously fallen on deaf ears.

President of the Union, Frederick Farrington said that the union is again pleading with Wells to sit and have a meeting with them.

“We are calling on you [Minister Wells] to see us,” Farrington said.  “Do not put the union on the side. We just want to sit down and discuss all of these dire issues.”

For months the union has been pleading to have an audience with Minister Wells, to discuss a number of issues, mainly:  wrongful ticketing, the use of improper bus stops and a fee increase for passengers.

Keith Curry, a member of the Union, expressed yesterday that the government does not give bus drivers the attention that they deserve.

“You may look at it and say, ‘they’re just bus drivers,’ but bus drivers have mortgages too, we pay rent, send our kids to school and support this country as well,” Curry said.

Meanwhile, despite yesterday’s demonstration, many persons who ride the bus told Eyewitness News Online that they were still able to get to their destination on time.

“I came from Cable Beach and the buses are flowing,” a passenger said, adding that they did not have to wait any longer than expected to catch a bus, which is sometimes up to 20 minutes.

Other passengers we spoke to said that they were not even aware that a strike was taking place.

According to Farrington, the bus drivers plan to demonstrate for as long as it takes, which could include days.

Minister Wells could not be reached yesterday for comment as he is presently out of the country.

Ginelle Longley is a broadcast reporter and occasional TV news anchor with Eyewitness News, also serving as the station’s evening radio news anchor for 103.5 The Beat. She has reported on news beats including government, politics, crime, human interest, business and even sports. In 2018, she was nominated for the Bahamas Press Club’s “Student Media Journalism Award”. View all posts by Ginelle Longley →