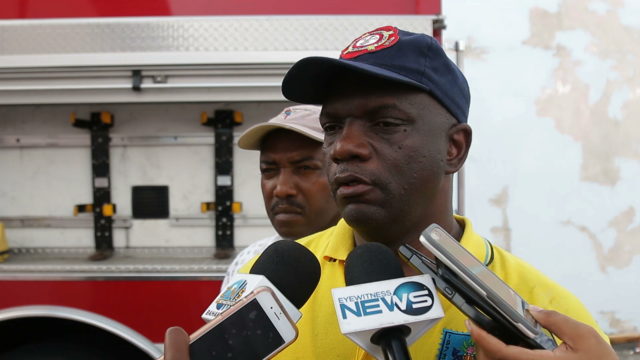 Officers attached to the fire services arm of the Royal Bahamas Police Force (RBPF) were dispatched to Burns House on John F. Kennedy (JFK) Drive after 8:00 p.m. Thursday evening, after a fire was reported to have broken out in one of the company’s warehouses.

According to police officials, the call came in just after 8:00 p.m. yesterday. Upon arrival, firefighters said they met smoke coming from the warehouse section.

According to fire chief Walter Evans, due to the size of the warehouse and – taking into account the two fires that occurred on Wednesday – all fire services were dispatched to the JFK location.

“… All available on-duty resources that is,” he explained.

“We were able to find out where (the fire) was and we had to remove a steel door to make access to the affected area.”

The fire was extinguished shortly after 9:00 p.m., however, alarms could be heard well after due to trapped smoke in the warehouse.

“Ther’s been no major damage to this company and so, we are pleased with that,” he said.

“We believe that operations should be able to resume as normal tomorrow (Friday), once we are able to remove the smoke, which is trapped on the inside of the warehouse.”

Evans said no major damage was done to the company’s inventory and applauded the proficient and quick thinking of firefighters on the scene.

“The officers moved very quickly. They were efficient in their strategy. They were very deliberate in their attempt to ensure that this fire was extinguished and to ensure the fire did not affect the wider warehouse,” he said.

Evans said the cause of the fire has not been determined and investigations are ongoing.