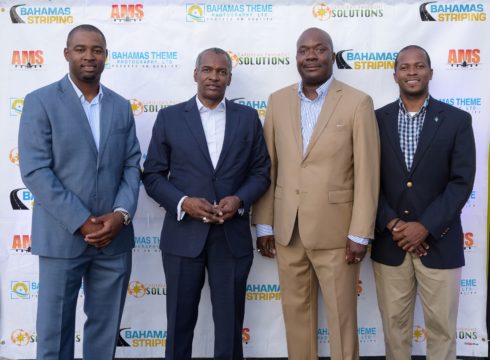 How do you compress nine years into 32 minutes?

Bahamas Striping Group of Companies (BSGC) accomplished that very feat, premiering its documentary to a diverse yet intimate audience gathered at the company’s office on Abundant Life Road on Friday evening for the first behind the scenes look at the nation’s most prominent striping company – its operations and offshoots; its frustrations and future; its glory and its giving.

“We wanted the celebration of this year to be etched in stone,” said Dr Allen Albury, managing director of the multi-million-dollar enterprise which started small in every way, save for ambition.

Produced by The Movi Group and narrated by veteran broadcaster Jerome Sawyer, the short film features lesser known stories and insight from the company’s principals and corporate insiders as well as snippets from employees, clients and civic and charitable organizations all helping viewers see beyond the brick and mortar exterior of the enterprise into its heart and soul.

The documentary is just the latest tribute for a business well-known for marking its successes. For the company’s principals, Atario Mitchell and Dominic Sturrup, it felt like the right time to tell their story, their way.

“Nine years has been a long journey, but it was a journey worth taking,” said Executive Chairman Sturrup whose only wish is that his father, Frederick Sturrup Sr., was alive to see his entrepreneurial success.

“We could have placed our money in a credit union and make three percent [interest] but we did not. We invested our funds in The Investment Group…That is how we make our country better, investing in Bahamians.”

Still, becoming successful meant tapping into the most powerful asset of the business, which for both owners, is their employees.

“It is through their hard work, dedication and buying into the vision that Dominic and I set, of where we want the company to go, that has gotten us to where we are today,” said Mr Mitchell. “The road was not easy. It was extremely hard. Even though it’s nine years I think we did 18 years’ worth of work.”

“Absolutely inspiring,” said Ms Ferguson, following the premier. “It confirms your faith in what young people can do, what Bahamians can do. Atario and Dominic showed us and the country that if you have a vision, have a passion and you have a will to make it happen, that it can happen. That came through very clearly in the video. I’m blown away by it.”

There from the beginning, Senator Mitchell expressed his admiration for the work of BSGC’s founders.

“They are diligent, disciplined. They have a vision not only for themselves but for our country and that has worked well,” he said. “I hope that other people are able to emulate their example.”

One attendee, “re-inspired” by the presentation, was Lincoln Deal II, owner of Island Link Tours and Excursions and the water-propelled jet pack company, Jetlink Adventures Ltd.

“In business, there are a lot of people who make a lot of money, but they do not reach back into the community and giveback in a consistent and meaningful way,” he said. “It was just inspiring seeing diversity of their philanthropic programs and the communities they have tapped into.”