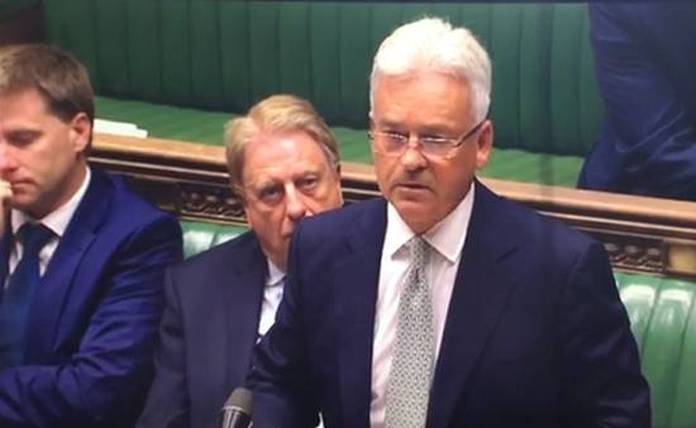 Sir Alan Duncan, Minister of State for Europe and the Americas, speaking in Parliament.

LONDON, England (CNS) — British Overseas Territories (BOTs) will be forced to make the beneficial owners of companies registered in their jurisdictions public after a cross-party amendment to a Sanctions and Anti-Money Laundering Bill was accepted by the UK government on Tuesday.

In a significant blow to the BOTs’ financial service sectors, they will be required to develop publicly accessible registers by the end of 2020. While foreign office minister Sir Alan Duncan said he would have preferred to reach a consensus rather than force the territories to act, the UK government had listened to members of Parliament.

However, the move to mandate that BOT registers will be public does not apply to the crown dependencies. This will be an issue that BOT leaders as well as those working in the sector will seize on as an illustration of the hypocrisy and unfairness that they consistently level at the onshore world on this issue.

During Tuesday’s debate Duncan claimed the UK Conservative Party had hoped to reach a compromise on the issue but the number of MPs supporting the push for more transparency in what are still seen as tax havens would have led to a defeat of the entire bill. Support for the amendment to force the hand of BOTs with financial sectors came from both government and opposition benches.

Duncan admitted that legislating for the BOTs without consent disenfranchises the elected representatives and may “risk damaging our long-standing constitutional arrangements, which respect their autonomy.” But pointing to the strength of feeling in the Commons, the minister said the British government accepted “that it is without a doubt the majority view of this House that the overseas territories should have public registers, ahead of it becoming international standard.”

Although not unexpected for the Cayman Islands government and the offshore sector, officials had hoped to delay the inevitability of public registers until this was a standard around the world. Premier Alden McLaughlin and finance minister Tara Rivers have been on a charm offensive since last year to head off the push to make the BOTs what has been described by some as the ‘guinea pigs’, putting the financial sector business at risk.

The Cayman Islands governor’s office released a short comment about the news, stating the British government would now do its best to promote open registers as the new global standard.

“The UK will use its best endeavours, diplomatically and with international partners, including through multilateral fora such as the G20, FATF and the OECD, to promote public registers of company beneficial ownership as the global standard,” a spokesperson for the office said on Tuesday.

“There have been continued efforts over a number of years by members of Parliament and special interest groups to lobby in favour of requiring the UK government to legislate for the overseas territories to put in place public registers of beneficial ownership,” the spokesperson added, explaining the circumstances that led to the Conservative government’s decision to accept the amendment during the parliamentary debate today.

“The UK government’s preference would have been to work consensually with the elected overseas territory governments on moving incrementally towards public registers. However we have to recognise the strength of feeling in Parliament on this issue. An amendment was tabled to include the CDs but this was withdrawn following the debate in the House of Commons,” the office stated.

This article was first published on Cayman News Service.