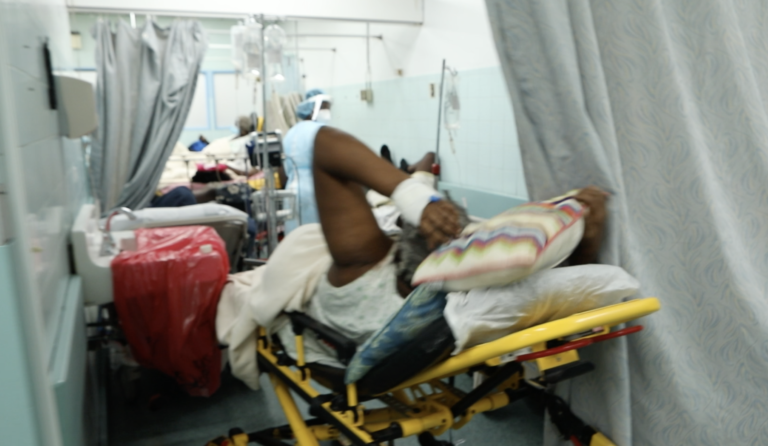 NASSAU, BAHAMAS — As healthcare professionals feverishly battle the onslaught of daily coronavirus cases and hospitalizations, Accident and Emergency (A&E) Consultant Physician Dr Raquel Davis-Hall said yesterday Princess Margaret Hospital is on the brink of collapse, delaying transfers of confirmed and suspected cases from the Family Islands, and shifting those on New Providence to makeshift isolation rooms.

She continued: “This is the worst it has ever been, for the whole time of the pandemic, since March 2020.

A&E has been tasked with accommodating admissions who have “nowhere to go because our ward space is full at this time”.

An isolation room in the A&E, which had a red sign that read: “High-Risk Zone” was housing a COVID-19 patient — one of several cases isolated on that floor.

Around 40 non-COVID patients were in the open area, many of whom were on trolleys, waiting to be seen by a physician, or had been seen and were awaiting a review.

Around 55 patients were being cared for in A&E with just eight physicians and nine nurses on the evening shift.

The sounds of muffled screams could be heard over beeping monitors and the general rush of foot traffic.

“A&E has been overworked, overburdened, and stressed out for the last 18 months since the start of COVID,” said Davis-Hall.

“We are the frontlines of this institution.

“We have been working day in and day out since March 2020; some of us since February 2020; with no relief; no breaks; nothing.

“And we are tired and we would like for the Bahamian public to know we care about you, we love you as our fellow brothers and sisters, but we want you to take care of yourselves.”

Noting that the virus and its variants have been “relentless”, she urged Bahamians to adhere to health protocols and get vaccinated.

While underscoring the severity of what health workers face, Davis-Hall said patients have been admitted at midnight breathing and have died within two hours.

“This virus is killing our citizens,” she said. “Please vaccinate yourselves.”

She said she needs more staff is needed such as nurses, though additional hires of physicians and senior house officers have made a difference.

“I need them to decompress our load,” she said.

“The load is great and we are feeling the weight and it is crushing us at times.”

A range of services at the institution have been impacted by some workers calling in sick for the sixth day.

But Davis-Hall said doctors have not left their posts or given up on their mandate, opting to continue working with health officials and the government to address their concerns that abandon patients.

She said while doctors do not make the sacrifice for money, it is almost “heartbreaking” to see some non-front line staff who receive honorariums, while many on the frontlines got nothing.

The general practice clinics have been converted to house around COVID-19 patients.

Around 20 COVID cases were waiting to be transferred to the COVID ward, which remains full.

Numerous large green oxygen tanks were stationed outside their rooms as healthcare workers in white hazmat suits and PPEs attended to patients.

Rooms used to put on and take off PPEs safely have also been used to accommodate COVID patients, relegating this sensitive practice for healthcare workers to protect themselves to bathrooms.

“Because the burden is so great, patients are now in this rooms,”

She continued: “We put ourselves at risk daily to manage and treat these patients.”

Asked if the institution was on the brink of collapse, Davis-Hall said: “I think we’re there.”

She said doctors have called from Abaco, Andros and Eleuthera, who have symptomatic patients and those who need to be investigated for COVID, whose transfers to the hospital have to be delayed because “I have nowhere to put them”.

“The islands are calling and I have nowhere to put these patients,” she added.

There are works underway to expand patient care, including renovation of an operating area to an in-patient care ward, which officials said were “close” to completion.

The male surgical ward has also been renovated and outfitted with new fixtures and equipment.

It is unclear how many more beds will come on stream.

There were over 140 cases hospitalized on Sunday.

A total of 19 cases remain in Intensive Care Units of various health institutions.