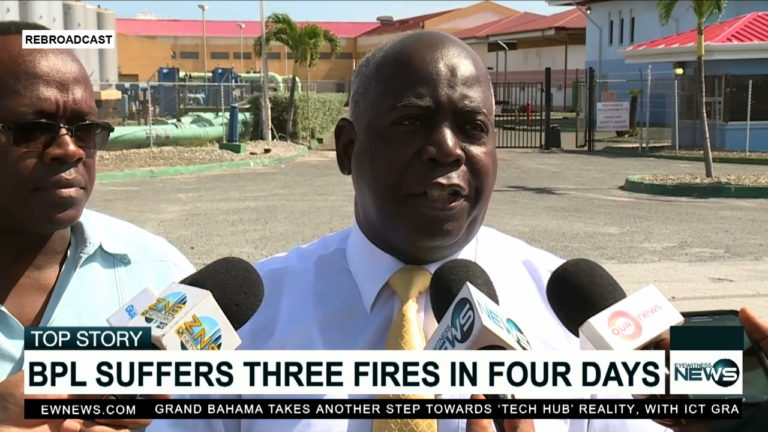 The opposition Progressive Liberal Party (PLP) asserted Monday that government has no idea how to efficiently run Bahamas Power & Light (BPL) and suggested that the Minnis administration should reengage Power Secure international to assist with power generation on New Providence.

The opposition’s assertions came on the heels of three fires, which erupted at the Clifton Pier power plant between last week Friday and Monday morning.

“Obviously what they have now is not the answer so, they need to find the answer,” said Philip Davis, PLP Leader.

“Power secure went through the proper processes for selection to operate here and that is why they were chosen. So, yes if they are able to re-work an arrangement with them, I would welcome them to do that.”

The Minnis led administration severed ties with the international power company, after taking office in May 2017.

While Davis suggested government rethink its position on Power Secure, it strengthened its call for a comprehensive probe at BPL, to determine what led to the three blazes and to better understand other issues which plague general operation at the power company.

The Fire Services Unit of the Royal Bahamas Police Force (RBPF), could not confirm what led to the blazes.

The first fire erupted after 9 o’clock on Friday night.

Superintendent Walter Evans, director of Fire Services confirmed, that it too firefighters four hours to extinguish that blaze.

“They were not in just one particular area so we are investigating now to find out what would have been the cause of these three matters and the frequency of them,” he said.

The fire services unit deployed one unit to the southwestern tip of New Providence Monday to improve response time to the Clifton power plant, in the event that another fire erupted.

“We will allow them to be stationed at the BPL power plant at periodic intervals to ensure that there is no reigniting and to ensure that we will be able to address those matters in a very quick fashion,” shared Supt. Evans.

Supt. Evans could not confirm if arson is suspected.

In the wake of the fires, management at the power company confirmed that they will install new camera systems, which will assist with detecting potential fire hotspots at the power plant.

Dr. Donovan Moxey, chairman of BPL, told Eyewitness News Monday evening that BPL will acquire a number of infrared cameras, to help identify the possibility of future fires on the Clifton Pier compound.

“BPL CEO Whitney Heastie and I toured the affected areas today and we have decided that we will purchase infrared cameras in the coming weeks to ensure that we are able to mitigate fires on this compound moving forward,” he said.

Dr. Moxey said executives do not expect the two most recent fires to affect power generation at the plant.

“The two most recent fires did not cause major damage at the power plant so, we do not expect that they will negatively impact power generation from the Clifton Pier power plant,” he said.