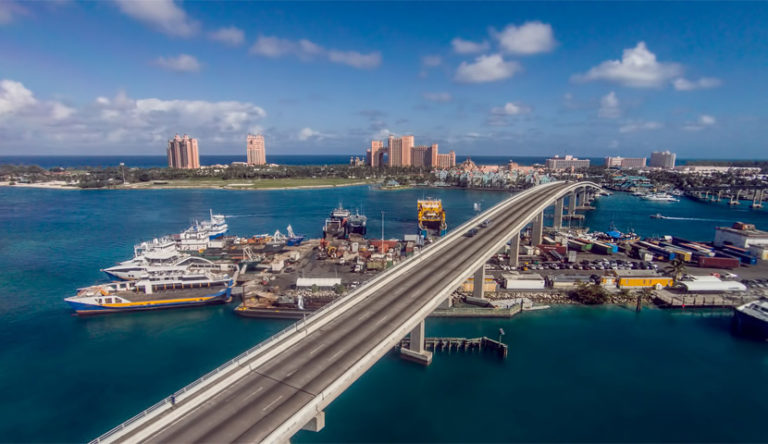 A facelift has been ordered for the Sir. Sidney Poitier bridge, and the work to restore the landmark which connects mainland New Providence to Paradise Island, will be executed by a fully owned Bahamian company.

Motorists that have travelled to Paradise Island in the past two days may have noticed that two lanes were closed, which was as a result of Bahamas Stripping carrying out its works to replenish and replace old road surface signs and lines.

Tony Smith, acting general manager of the Bridge Authority said, it’s the first time a Bahamian company has done this type of work on the bridge.

“The last time the bridge had any real striping done to it was about 20 years ago when the bridge was originally built. And since then, there hasn’t been any real maintenance to the striping aspect of the bridge since then,” he said.

“Bahamas striping has come along in recent years and they have delivered very good quality work, they are progressive and we thought it would be a good thing to work with a Bahamian company that can deliver the quality work that we need.”

Atario Mitchell, president of Bahamas Stripping said, he is proud of how far the company has come since it formed almost a decade ago.

“For me, it gives me a good sense of pride to know that the company I started eight years ago has got the confidence of the Bridge Authority,” he said.

“The last time this bridge was striped it was by a foreign company. So, to know that eight years since my company started we are the leading road striping company in The Bahamas, it gives me a good sense of pride to know that persons see us as professional and gave us a job such as this one.”

Dr. Allen Albury, managing director of the company explained to Eyewitness News the work that is expected to be done over the next few days.

“We are carrying out striping work that is putting in the center lines, the edge lines and also putting in all of the pavement marking, speed limits etc. So, we are really excited to be here,” he said.

“Today we have a 100 per cent Bahamian crew working here today and it symbolizes what is possible in the Bahamas when Bahamians are given an opportunity. We have a crew here working hard and this means a lot to us.”