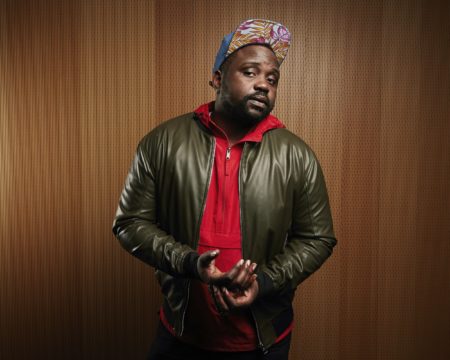 In this Nov. 15, 2018 photo, Brian Tyree Henry poses for a portrait in New York to promote his latest film, "If Beale Street Could Talk." This year Henry has been nominated for an Emmy, a Tony and this fall he plays a small but essential part in two of the season's top film, "If Beale Street Could Talk" and "Widows." (Photo by Taylor Jewell/Invision/AP)

NEW YORK (AP) — When Brian Tyree Henry filmed his scenes in “If Beale Street Could Talk,” he wept. When he saw the finished film, he wept again.

In Barry Jenkin’s lyrical adaptation of James Baldwin’s celebrated novel, Henry plays Daniel Carty, the just-out-of-jail friend of Fonny (Stephan James). When Fonny and Tish (KiKi Layne) run into Daniel on the street, they retreat to Fonny and Tisch’s apartment to catch up. The intimate conversation aches with the pain of incarceration: Daniel’s past, Fonny’s future. It’s a devastating but beautiful crescendo: two vulnerable black men, contemplating a world pitted against them.

It’s no surprise that one of the most moving and profound scenes of the year happens to be one with Henry in it. On stage and screen, in big parts and small, the 36-year-old actor’s soulful sensitivity and vast range has been on display with remarkable regularity.

This fall, Brian Tyree Henry co-stars in two of the year’s most anticipated films: “If Beale Street Could Talk” and “Widows.” He also earned a Tony nod earlier this year for “Lobby Hero” and is Emmy nominated for his work on FX’s “Atlanta.” He says he still marvels at the fact that he gets to perform for a living. (Dec. 3)

There is, of course, his aspiring, oft-irritated rapper Alfred Miles, aka Paper Boi, on “Atlanta”: the stony, eye-rolling face to the series’ surrounding absurdity. Its second season earned Henry his second Emmy nomination in two years. (His first was for a guest appearance on “This Is Us.”) The Broadway revival of Kenneth Lonergan’s “Lobby Hero,” in which he played a conflicted security guard, won Henry his first Tony nod. And a few weeks before “Beale Street” hits theaters, Henry made an equally potent, if far more menacing impression as a politician in Steve McQueen’s “Widows.”

Henry has a deep reservoir of emotion that never feels very far from the surface, and he speaks volubly, sometimes nearing tears, about the fictional lives that people his brain. Henry simply feels a lot — maybe too much so.

“I feel everything,” he grants with a knowing grin. “These past two years have been a topsy-turvy thing for me. I never in a million years could have imagined something so fantastic happening in my career. But I need to let ’em go, these guys.”

“That’s been kind of a problem as of late,” Henry sighs. “I tend to wear them as badges of honor, which they are.”

Henry grew up the baby in a Fayetteville, North Carolina, family; his sisters were already adults. His parents divorced when he was young and after graduating sixth grade, he was sent to live his father, then in his 70s, in Washington D.C. After attending Morehouse College in Atlanta, he got his master’s from the Yale School of Drama. Acting, he says, saved his life because it allowed him to express what he observed.

“Most of my life, at a very young age, I got to see what it was like to be surrounded by the lack of care — to see that people are human, that no one is impervious to pain, that pain hurts, that it takes time for things to heal,” says Henry. “I spent most of my life constantly trying to hold on to the things that mattered.”

His Broadway debut came in the original cast in “The Book of Mormon,” but it’s been “Atlanta” that catapulted Henry’s career. Along with lending his voice to the upcoming “Spider-Man: Into the Spider-Verse,” he’s already shot four films due out next year (including an action comedy alongside Melissa McCarthy). At the moment, he’s shooting the Brooklyn-set indie “The Outside Story.”

“Alfred, this season, I had a time. I was like: This prom date sucks right now. But I had to confront it,” says Henry. “It is imitating my life, in a way. That’s why I’m glad that Alfred found me.”

“Atlanta,” particularly in episodes like “Barbershop” and “Woods” (which was a tribute for Henry to his deceased mother), has given the broadest platform for his talent. But films like “If Beale Street Could Talk” have showed how much Henry can do with just a handful of scenes. His presence instantly adds depth and gravity.

“He came onto set, maybe he was there for a day in a half,” marvels James. “He was already a huge Baldwin fan, but what he was able to bring to that moment … You talk about black love; that’s another form of it. Black love between brothers. That brotherly bond where we’re sharing our deepest, most intimate fears, the things that have broken us, how do we maintain our strength through these moments.”

Jenkins has said those scenes solidified the whole project. For Henry, they capture the duality of life as a black man.

“There’s always a constant audition process, I call it, of having to prove to people that you belong where you are,” says Henry, burly and broad-shouldered, remembering when Yale students would assume he wasn’t a classmate. “I’ve been very fortunate to come to this point in my life where I’m done doing that.”

Henry lives in Harlem, just a few blocks from where “Beale Street” was filmed. It’s almost as if his characters are encroaching, ever closer, on the actor, despite his best efforts to leave them at the door. But he’s learning to live with his hypersensitivity.

“I wouldn’t change that because it means I’m present. It means that I see you,” says Henry. “But then at the same time I need to figure out how to flip it so I see myself too.”